Lime of the Season, a Zelda arrangement album of Oracle of Seasons and the follow-up to 2010's Essence of Lime, was recently released & is available for FREE! We've got a double-dose of panel-reviewed & approved arrangements from its 42 tracks for you today; up first is album director Hylian Lemon with a wintry, downtempo chiptune/electronic jam:

"This is the first track I started for Lime of the Season, a project that aims to represent the cycle of a year through the music of Zelda: Oracle of Seasons. Cryomentus is an attempt to turn Gnarled Root Dungeon into an icy cave for the winter section of the album."

"totally kickass arrangement, as I've come to expect from you. Your stuff never fails to bring to mind Grant Kirkhope and the BK soundtrack, and that's high praise. as for critiques, those highs can get pretty.. high sometimes. the energy level also seemed pretty static so some kind of breakdown or tempo changes would have helped spice things up. however, that stuff is nitpicking. overall I really like the song a lot, and as always am looking forward to what you cook up next."

"Wow, this is really solid, inspired stuff. I appreciate how you kept most of the arrangement within the Gameboy-style chiptune realm but managed to be completely different (and sound a LOT better) than the source at the same time. The non-chiptune elements definitely help define the track as a ReMix by OCR's standards, but they fit well and don't feel shoehorned in.

Arrangement-wise, it's a bit plodding, but it fits in the context of cave music, and it didn't bother me enough from an objective standpoint to really take issue with it. I'm on board with what you've done here, good job man :)"

Agreed on the bolded quote re: staying in the chiptune realm but simultaneously changing things up quite a bit. Last but never, ever least, OA chimes in:

"I like how the arrangement keeps me on my toes, by never settling into a distinct groove for too long, and always adding cool textures and counter melodies."

Ditto that; while the energy level might be a little static, there are plenty of pivot points and unexpected modulations that keep things fresh. Definitely a nice, creative track that keeps the chiptune front & center while expanding on it quite a bit - check it out, then check out the entire album for more!

Amazing blend of chiptunes with the actual instruments used in this remix. The chiptunes do overpower the synthesizers. But that’s what makes it great. It makes the synth work very ambient, and almost intimidating if you don’t hear the chiptune melody.

Yes! I love the Oracle games, and I absolutely ADORE the Lime albums, and Hylian Lemon in particular! There's a certain blend of chiptune and [insert genre here] that always seems to be executed extremely well, and this mix is no different. The "real" instruments are mixed in very well with the blips and the bloops, and I felt that the meter mix-ups around the 2 minute mark kept things interesting until the end. Fantastic work!

I was pleasantly surprised at how different this was from what halc and Emu said. I didn't think it was plodding at all, and I thought the dynamics were well-executed. If you imagine this placed into a suspense context, it rises and falls pretty well.

Someone put a Lemon in our lime. And it's a very good thing considering the ReMix we've found with it. Very cool electronica chiptune arrangement and a great amount of direction throughout the mix to keep it fresh. While the energy is static, like DJP mentioned, I think the style this ReMix was done in and the way it was mix more than makes up for any real nitpicking. A job well done, Hylian Lemon.

The Legend of Zelda: Lime of the Season 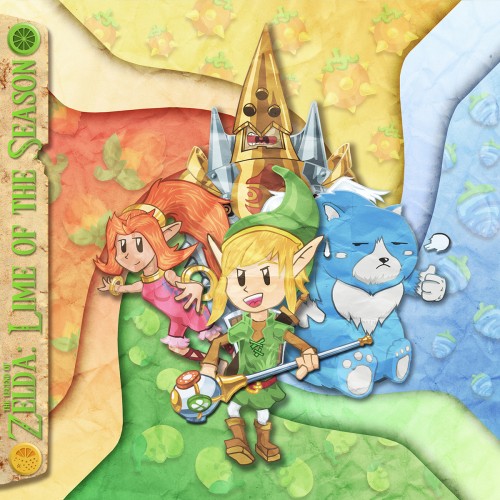