And now for something completely different... this vocal metal mix is our first arrangement from the soundtrack to PC indie horror/adventure game The Cat Lady and our first featured submission from Magnetic Ether (Karlyn Singh), who projects extreme doom & darkness onto the source and adds growled poetry into the mix for something moody & aggressive:

"This is a stoner/doom metal-inspired arrangement of "Don't Follow the Light" by micAmic from The Cat Lady soundtrack. As is usual for many of my arrangements, the source has been taken apart piece by piece and then re-assembled in a very different way.

The first minute and a half is based on the same repeating riff from the beginning of the source, but little changes are added as the track progresses in order to keep things interesting. The riffs at 1:44 and 2:22 are lifted from the string sections in the original, but are altered to create a more melodic guitar line. The section at 2:48 reflects 0:36 from the original track but extends it, pulling in material from other parts of the source (mainly the stuff played by piano/lead guitar that's dispersed sparsely throughout). The solo at 3:53 is largely original but features references to two other tracks from the OST between 4:13-4:32 (namely 0:00 and 1:00 from "Two Stone Rings" and 1:59 from "Psycho"). The ending, of course, goes back to the opening riff to bring it all together. Additionally, the organ parts at 1:04 and 4:45 are based on various piano chords from the source although I can't remember well enough where they came from to give time stamps.

The lyrics are based on the "River" poem﻿ by Agnieszka Surygala from chapter ﻿3﻿ of the game but are not a direct reading of it, rather a mixture of lines and words that have been re-arranged into something else. I heavily re-arranged the text, added a few words and shortened it quite a bit so that my lyrics are more of a word collage than a recitation of the poem. I've thought quite a bit about whether I want to release the exact words I used due to their relationship to the source material. And, ultimately, I think I'd prefer that, if anything, people just look at the original poem.

This is a resubmission. The changes I made are as follows:

Thanks for taking another listen!"

First off, the source is pretty cool, and substantive, and a great candidate to develop a vocal doom metal mix of this nature from; I can see the inspiration and it makes sense to me. This is one of those genres that I don't naturally gravitate towards, but I can still enjoy selections from, especially when they hit me the right way, as this does. It's bleak, it's raw, it's dark, and it's not exactly the feel-good anthem of your 2018 summer vacation, but not everything has to be. Of the revised submission, Gario writes:

"Oh awesome, we got another rendition of this track. I'm glad we did, since this was a pretty sweet arrangement, and the source was relatively unknown. Let's see what we've got here.

Well, it sounds a whole lot better, with the overall arrangement sounding louder, while also sounding more crisp with a better balance between the highs and the lows. The singing is still impossible to understand, but again I have that issue with ALL black metal, so that's a stylistic choice. The leads in the mix are placed properly in the mix, with rhythm being places well in the middle and the bass still acting as a strong foundation to the track (though it did seem to overcorrect a little - a hair more bass would've been nice).

What can I say, you went back and fixed everything. Looks like we're going to have some Cat Lady love on the front page. Let's do it."

No amount of remastering was going to lend crystal clear intelligibility to the vocal, but as Greg mentions, that kinda goes with the territory. I like how this mix develops specifically towards the end, with lead guitar making its presence increasingly known & sounding pretty hot; it's a metal mix, but there are hints of blues/rock in some of the end bits, and those will always make me happy. Not much else to say; it's a genre/style that tends to polarize a bit (understatement), and The Cat Lady obviously isn't Zelda (and again), but I enjoyed learning about the game, checking out the soundtrack (which deserves the attention), and then fully appreciating what Karlyn's done with this particular source & how the in-game poem was incorporated. Creative, dark, emotive stuff!

Points for style and execution here - man, I'm really impressed about the vision to remix this way and the moxie to pull it off. Really enjoy the adjustment sections (like 2:45-3:25); the handling reminds me of some of the best Doom remixes this site has. Yeah, maybe this isn't everyone's cup of tea, but then they're missing great guitar sections like 4:30-4:42 (so great!) as well as vocals to me that I don't need to hear the words, it's almost like another instrument.

Unique and worth a listen! 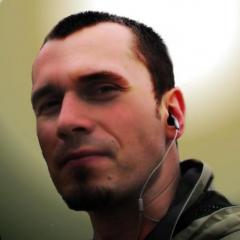 This is how it supposed to sound - from the beggining.

Standing by the river I close my eyes... one jump and I'm there?... no... someone jumped after me... he will never be my friend.