HomeReMixesCrypt of the NecroDancer "Sepulchre Soirée"
|

ReMix:Crypt of the NecroDancer "Sepulchre Soirée" 2:57

HAPPY HALLOWEEN! We've got an appropriately-themed double feature for you today, starting with this sweet EDM take on "Mausoleum Mash" from Chimpazilla (Kristina Scheps), off of Crypt of the NecroDancer: OverClocked:

"I remixed three tracks for this album, and it was very hard to decide which one to submit. The entire album is amazing! I was honored to have been invited to the project by Danny B. and Flexstyle, and the tracks were a joy to write. "Mausoleum Mash" is probably the closest to my heart since it is the first of the three sources I remixed, and, of my three, this one is probably heard the most in the actual game. Congrats to all ReMixers for the album winning Best Fan-Arranged Album 2017 on VGM Online! Thanks again to Danny and Flexstyle for including me in the team!"

This album was a tightly-run ship & a great collaborative effort, reflecting OverClocked Records' emphasis on quality and delivering one hell of an interpretation of the modern VGM classic that is Danny B's OST. Since the tracks all had to fit & work as replacements for the in-game OST, they share more similarities than usual, but judges were (unsurprisingly!) unanimous that Kris provides a unique & enjoyable spin on the original. Judge Oji sums it up nicely:

"I'm really glad Kris submitted this, and I'm also proud of the job Mike/Flexstyle did in marshaling this effort; the VGMO award was well-deserved, and we're always in it to pair up the OCR community with composers and developers. OCR being an integral part of Danny B's start as a musician and his emergence as a modern legend among VG composers is part of what makes the community a special place.

Onto the track, it's a small thing, but the 90s "WHOO!" at 1:52 sounded incredible, because the effects on the trail-off seamlessly blended into the instrumentation, and the sound seemingly lasts all the way until 2:05, maybe even longer! Such a sweet touch.

For all of the arrangements on CotND: OverClocked, there's the unique challenge of holding fast to the tempo and skeleton of the source tune while presenting your own personalized version. Changing up the instrumentation and more importantly the textures and dynamics of the piece was the main avenue Chimpa had available to her to stand apart from Danny B's version, e.g. the stutter steps of the original vs. the dropoff with padding for 1:02's section, and the more steady percussion patterns in the original vs. more variations in Chimpa's take.

I'm not at all surprised she was able to do this so effectively, and her work on this soundtrack was an important reason why I roped her in for an arranged piece for the soundtrack to A Hat in Time when OCR was asked to contribute to it. Give this lady some more pro VG gigs, she'd knock 'em out of the park."

Ditto that; Kris has picked up a ton of production knowledge from listening to & learning from artists like Flex, bLiNd, and others, and while her artistic voice is still unique & her own, she's continually stepped up her game over the years. This is a great example of that, with superb attention to the types of details that make polished EDM really flow; fantastic work!

Really clean sound design and production. I like the simple but effective intro idea. The switch-up around 1:50 is probably my favorite part. For some reason I hear a subtle sine-wave effect on the dynamics over most of track? Maybe it's just in my head. It's kinda cool

Nitpick: Only three minutes long. It has a good flow and logical arc but a few sections could have been easily extended and developed in subtle ways. There were moments where a cool patch would show up very briefly and I wondered, "why not develop that a little more?"

Crypt of the NecroDancer: OverClocked 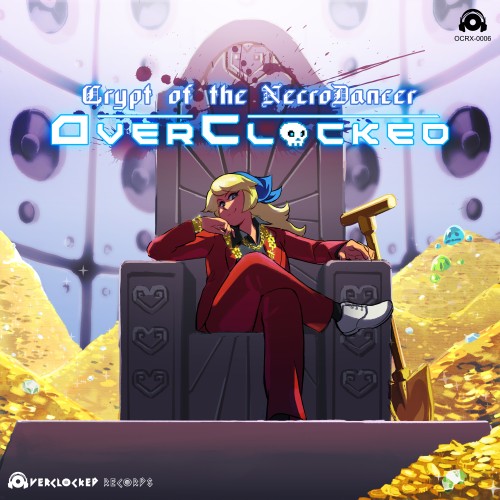