HomeReMixesThe Legend of Zelda: Ocarina of Time "I Can't Go On (I'll Goron)"
|

This is the final mixpost from the three mixes Zas sent back in 2012, from the seemingly still in progress Legend of Zelda: Ocarina of Time: Seven Years. Posting these has been like opening a time capsule, in a sense, since many of the judges who weighed in nine years ago aren't staff any more; the music itself is rather timeless in its eccentricity, mixed instrumentation, and blend of acoustic/sampled elements. For this third featured selection, Zas blends playful chromatic percussion, sound FX, plucked string elements, hand drums, woodwinds, and some lo-fi/retro brass (sounds like it's being run through a speaker simulation almost), for a quirky global jazz/folk meditation on "Goron City" - Vig was one of the more critical judges, back in the day, but he was feeling it:

"Wow. Excellent job at creating a space for your track to live in. Sounds very live but still clean. Very loose and gritty. Never gets boring, but it doesn't demand your attention either. I feel like this would be the Goron's equivalent of the Star Wars cantina band. Very well done."

"Wow, this is everything but the kitchen sink in one song, and yet it still ties together pretty nicely. Kudos. No real production problems either. I wouldn't have minded hearing more reverb, but there's nothing keeping this from passing."

I think the kitchen sink *might* actually be in there, too ;) I love the way Zas incorporates brass, and I love the retro/phonograph application to lend a certain 1920's style vibe. That's just one portion, though - most of the arrangement leans more on an eclectic mix of chromatic & non-chromatic percussion, and I love the myriad attack transients on display, along with the zany FX. Feels like it's a blend of African, South American, and New Orleans influences, but ultimately... it's "Zas," a genre unto itself which I've been pysched to finally feature more of in 2021. Enjoy! 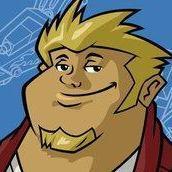 As I'm listening to this, my mind is carried on a meandering tour through warm torchlit corridors revealing vignettes of the simple daily life of the Goron. They bustle hither and thither in their subterranean streets lined with crates, barrels, ropes, and market carts displaying the day's freshest rocks! As the sun slowly sets, I see Goron gather on their doorsteps, warming up their voices or their various improvised instruments to prepare for the village's evening ritual of communal music. What a lovely journey! (And it sounds like one made it a tad late to the festivities at the very end. ^-^ )

I read the title as Lil Goron and was expecting a reggae jam, hah. I really dig Zas' deliberately hodgepodge style of stitching these songs together, almost like a patchwork quilt. I'd like to hear his finished OoT album one day.