From a new ReMixer comes a new ReMix from a newly-ReMixed game. If this had been submitted with no accompanying info and an opaque file name like "song.mp3" I would have guessed that it was a remake of some F-Zero song I wasn't familiar with; it really sounds like a rockin' F-Zero arrangement, with the same energy, rock-feel, and motifs/riffage you'd expect. Only it's from Star Ocean: Blue Sphere on the Gameboy. Go figure. My advice is for F-Zero fans to check it out even if they have a strong aversion to all things RPG. Thirst-inspiring ReMixer SnappleMan gives us this upbeat synth-rock affair, which mixes synth and guitar quite adeptly, giving both the spotlight with a great synth lead over some thick, meaty guitar chugs and later a lead guitar coming in for a brief duet then taking it away, all whilst a rock kit keeps things moving forward and pulls some good fills. Jesse writes:

"this is much more solid than most of the metal remixes we get. the playing is tight, it isn't repetitive, it isn't too long for the style, and the instruments are separated and clear."

I think the "separated and clear" part is especially important for this genre, as often things get lost in a wave of sonic 'enthusiasm'. This has the same clarity of, I'll say it again, much of the F-Zero and GX tracks, and is certainly unique for being an RPG arrangement that sounds as such. Good stuff from SnappleMan, with enough arrangement to cut the mustard and a solid dosage of electricity to galvanize the spirit.

I don't know the source, but I'm getting a FF/CT vibe with some Tales thrown in. Maybe I'm hearing a little FF VI 'Omen' too, which is what I know SnappleMan's work from.

Enjoyable fight music. :3 The tune is fast but not too fast. There's still a lot of power behind it, while the chippy elements provides a nice 16 bit feel. I can't single out any favourite bits. It's all good.

Wow, the first ever submission from SnappleMan. I'd be feeling quite nostalgic just hearing how far he's been developing from here

It starts out with adapting the A section for the source twice with the lead synth carrying the melody, with some tasteful harmonies being thrown in. After that it soon managed to dive into the rest of the source; even back then I am noticing that his keyboard inputting skills are extremely tight, and the added synth solo at 1:55 managed to keep adding a good sign of excitement for the setting. I'd say the arrangement, while not really ground breaking, really managed to adapt well with the site's mission at the time.

The guitar performance, which is what we know SnappleMan for a lot these days, seems to be riddled with faults though; I can understand the lack of virtuosity and the sloppy timing sometimes, but there have been a clear set of times when the tuning comes off as off-key and makes it difficult to try and get a clear grasp of it. That and the rather muddy sounding recording of them these days seems to make it feel less than stellar, and may come off as more aged than quite a handful of his earlier works.

But for an addition for the Star Ocean series, fans have their thrill - a nice, straightforward fast rock take. Having been accustomed to Andreas's progression as a musician over the years I probably won't see myself keeping this, but it's a great insight to see exactly how much he has developed in the years since this track's posting

something that could be expected to sound from

a GBA stereo or DS in this day and age. Downloaded. 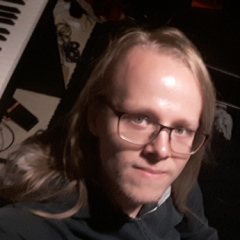 a great remix with some really kick-ass playing, I agree. though i do have some problems with the production. The rhythm guitar sounds very low and "muffled", if you know what i mean. Almost so low that it blends with the bass. Because of that there's a huge hole between rhythm and lead which makes it feel hollow. I don't know if it was intended or not but some EQ tweeks could have easily fixed that.

Drumwork is pretty good here, and the track is catchy. Personally I don't get the "F-Zero" feel that DJP claims, but that's just me. Feels more like a battle theme, but I don't know the source, so that's a guess.

The intonation on the guitar only really sticks out when it's harmonized by the synth. Then those out of tune notes stick out. Playing is good though, nice solo.

A few guitar intonation issues in a few parts, but the synth and guitarwork is very clean. Especially good is the drum programming.

I'm a fan of the more recent Snappleman mixes, and it's cool to hear where he came from. He's improved a ton, but his first mix on the site is still really solid.

This is the only remix from the game though. So you can't really compare it to the remixes from Star Ocean, which is a different game alltogether.

I agree with this. Review the song itself, not how it compares to others.

I loved the energy in this song a lot. The only thing that I find kinda lacking is the very very heavy game feel to it. Granted, its a game remix, but other than the guitars, it sounds like it could be played back on a snes. Was that the overall intention? I have a hard time rating this personally, cuz.. I do enjoy it a lot (Hell I can spend all day listening to SPCs and NSFs

), but in terms of originality, I don't know. I'll give it a 7.5/10 but I think it could easily be improved to a 8.0-8.5 if it sounded a little less gamey/tracked. Great job for a first submission, however, look forward to the next track!

doesn't really stand up to the other star ocean remixes...

This is the only remix from the game though. So you can't really compare it to the remixes from Star Ocean, which is a different game alltogether.

doesn't really stand up to the other star ocean remixes...

Nice wedding of guitars and synths:

Nice demo of what a "keyboard head" can do.

Oh yeah, you smack that monkey. Smack it good.

Not only that, but it's completely transcribed by ear! I mean cmon, anyone who needs a MIDI file is sad and pathetic!......

Seriously though, I'm glad you guys enjoyed it!

I don't think it lives up to Moonchildes claims, but hey, it's nice to see ones work being enjoyed by others.

Hmmm.... might it be in bad taste to reply to my own review thread? The shoe is clearly on the other foot now, although I'll be walking in circles.

This remix is one of the best synth metal remixes I've heard done by anyone on the net. It sounds great. The production job is fantastic as everything is clear sounding.

The live drums played via MIDI controller are very well done and often times sound realistic enough in both playing and quality to make me think I'm hearing a real drummer. And the kicker is he has only gotten better!

The guitars sound great, one of my favorite points is right around 1 minute where the synth starts to go into a lead and you hear the muted guitar playing accompanying the lead.

I can't really say anything negative about this remix. It is faithful to the original yet varied, and keeps you listening for hours and even days on end due to its badassness.

What did you think? Post your opinion of this ReMIx.