And bits. And bits. Suzumebachi's last ReMix to be posted was OVER two years ago, but he's been relatively active in the scene and making music during the interim. Seems it's finally produced something that he was cool with submitting, not only here but as an official track on the Kirby's Adventure 'Rise of the Star' site project. While not as outlandish and texturally varied as Adhesive_Boy's initial submission off the project, Ty's nevertheless put together a strong, melodic rock piece. Before I go too much further, I'd like to give a hearty g'day to our newest judge, and second panelist to hail from the land down under (bearing obligatory vegemite sandwiches, as Jivemaster did), TO (alias Lee Barber). He's been involved with the site for some time, both as a ReMixer and on the forums, and even thrashed the formidable Mr. GrayLightning a few times at the manly and testosterone-infused game of chess. We thus welcome him on board, so to speak, and promise to respect him and treat him as an equal... when not making cheap Paul Hogan jokes at his expense, and tying his kangaroo down, of course.

Right then, on to the mix. The intro speaks of something more jagged and harsh than what the piece actually ends up becoming, a 6/8 rock ballad with a prominent piano presence and good healthy two scoops of synth brass and other textures. When the piano enters at 0'13", after a bass lead-in, things start fleshing out as being balanced between edgier timbres and more relaxed instrumentation. It's at 0'23" however, when the piano really picks up on the progression - this is excellent arrangement, very natural, fits the mold of rock piano, and the production integrates the ivories well, pushing them stage right and making sure they're not pristine in clarity, which would sound off in context. The synth sections that follow were a wonderful way to fill out the piece and extend it past the three minute mark. Furthermore, the brassy analog lead that's utilized fits well, doesn't come off as overly cheesy, and has a vaguely proggish feel to it. Ty had some guidance from a couple guys who know their stuff, which could only have helped:

"The guitar work was all done in one take because, go figure, after the first take my equipment refused to work, and I ended up having to replace my sound card. Though I eventually ended up getting an E-MU 1820M, which I am quite happy with. And I digress. The percussion is rather simplistic, as in my Xenogears mix (hmm.. maybe I just suck with triple meter.. oh well). I'm most proud of the keyboard work, which was played live as well, and obviously quantized (HA). Also, I'd definately like to point out and thank Darangen and Mr. Ansari for helping me with the mixing/mastering side of things (not to mention, Shariq, for the cracking of the IRC whip)."

The percussion isn't the arrangement's strong point, compositionally or from a production perspective, but it's also not particularly detrimental, plus some nice work was done on the hi-hats to reinforce the meter. Brandon insightfully pointed out some of the shortcomings but still had a positive take, as did the rest of the panel:

"I’ve got a few minor gripes here and there. Most notably is the simplicity of both the percussion and the synth design. While I would like more original sounding synths at 1:52 or more robust drum sequencing throughout, I’ll chalk both up to a successful attempt to remain somewhat true to the feel of the original. Also, as Larry mentions, I think that the pads are mixed a bit loudly, especially past 2:20. They give way to much presence to the outro in which a softer approach would yield a smoother resolution.

Good stuff all around though and a favorite of mine from RoTS. Congrats on your successful work on that project and on another posted ReMix."

I'm a sucker for short, melodic pieces, anything that incorporates electric guitar and piano adeptly, and most pieces in 6/8, so there's a lot to like for me, regardless of some of the simplicity, and I think that'll hold true for others as well. Wonderful to see Ty's return to OCR, welcome Mr. Barber, post another compelling and original site project mix, and just plain ole listen to good musics.

I like the variations that you do in the track, starting out with distortion guitar, after that some piano, and then some techno sounds.

Agreed. The opening guitar work and piano worked together well in the track. The way the ReMix goes in and out of styles was a nice touch. A good ballad if I do say so myself.

For anyone who can't tell the source, it's the stage music from some of the Rainbow Resort stages in Kirby's Adventure. This remix is wow...

i meant to leave this comment about 5 years ago but oh well. i love this mix 3

Hahaha, SO WEIRD you should say that because the minute I saw this back on the front page I thought exactly the same thing. This song is one of my initial inspirations. I used to listen to this back in the day on my MP3 player. It had guitars in so I could play it really loud and stay looking cool. ^W^

i meant to leave this comment about 5 years ago but oh well. i love this mix 3

This is one of those weird tracks that I've forgotten about because I had thought I had already decided one way or the other if I liked this one or not but apparently I hadn't. Looking back on my records, I haven't reviewed this one. Huh...

Annnyway, I agree with OA for the most part on this track. The transitions feel really stop-go. Unlike OA, I don't care for the guitars or synths as much, but the piano work here is wonderful. Also there's a whole lot of things going on here which ensures that there is no repetitiveness whatsoever, and that's a really good thing. I also like general feel of this mix; it feels very well formed and well thought out.

After dwelling on this, I do like this and recommend checking this out.

I'm sortof torn on this one- i dig the guitarwork throughout, and the synths are good, but the percussion is weaksauce, and the transition range from good to super-weak. The mixing was mostly good as well, but the ending didn't make sense to me. Still a lot of good things happening in this piece, and I'd love to hear more mixes from Suzu. Hit us up with some more, please!

I like the variations that you do in the track, starting out with distortion guitar, after that some piano, and then some techno sounds. I don't know the original track, but this sounds really cool.

Keep up the good work.

One of the best remixes ever heard!

I can't recognize the original tune but...I like it anyway!

Still lovin' it and as others have mentioned the replay of this arrangment is incredible.

This song is definitely one of my favorites. There's something about a good piano piece that never gets old. I could see myself rocking out to this song 30 or 40 years down the line.

There is no song I can listen to more often than The Ballad of Sir Kibbles ~ Theme of Dream Hunter regardless in which mood I am.

I never commented on this remix though I've been listening to it alot since it was released.

I just wanted to comment on how much I like it. There's just something for everyone in this one. Usually I don't like that dirty guitar sound but in this one it really sets up well for the piano.

Holy crap, I love this remix. I can't even think of anything specific to say...

Great ReMix, but I can't recognize the source.

This is probably my favorite song on the RotS project. Kind of a rock feel, but not quite. Love how it's hard to tag a genre on it, and yet it flows so smoothly. 9/10

it kinda reminds me of manheim steamroller, they are like... rock orchestra or something... but they have more hornd than e-guitar.

Kirby's Adventure: Rise of the Star 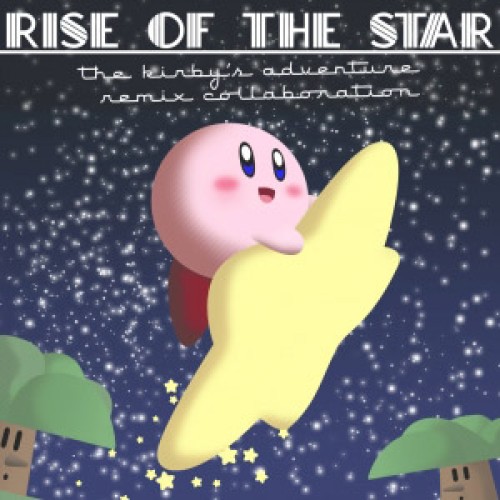