Besides having a last name that my attempted pronunciation would likely eviscerate, Elisabeth Pezouvanis is a kickass girl gamer and frontwoman for Game Over, who released their newest album, NESperado, back in May. She writes:

"An album that was delayed for almost two years because of member switches. Ironically, we ended up with the same vocalist we've always had, and I'm happy we did. Hyrule's Angel was actually on a CD along with newsstand issues of Electronic Gaming Monthly in January 2005, but this is of course a remastered version. Info about Game Over always to be found at www.nintendometal.com."

Of course, if you haven't already, be sure to check out their existing ReMixes of Mega Man 3 and Punch-Out!!, the latter being something of a landmark submission in the annals of OCR. Speaking of which, we're approaching OCR01500, and it bears mentioning that a few things will happen as a result. Posting may slow down, we're performing a sitewide lockdown/review process to remove any ReMixes that constitute violations of our standards, and on a more positive note, we've been implementing some new features on the site, and will continue to do so. The latest additions are the tabbed navigation for certain detail screens, which will be added to as the site grows, and the utilization of MediaWiki, the same software that powers Wikipedia, for our site's knowledge base.

Right then - GO take on the original Zelda adventure in their heavy-but-melodic style, complete with original, thematic lyrics. The intro is relatively clean electric, with vocals and drums entering at 0'20". While I like the lead vocalist's voice more when he's harmonizing with himself or accompaniment, it's impressive that a vocal/lyric was formed around this melody, as the trailing triplet on the end of each phrase presents something of a challenge. "cleanest snow", "-quility", "breathing slow", and "-ternity" are really rather good terminations, and this trend is continued throughout. There's piano later on, and the mix's six-plus minutes are also filled with some excellent guitar soloing. Enchanting guest vocalist Alexandra joins in on the vocals, trading off certain contextual lines and harmonizing on others. The group's been around awhile, but they've lost none of the energy that made them unique and exciting back when Little Mac made his first confession. Enjoy their latest opus and be sure to check their site for more wholesome nintendo metal goodness.

I can't say I fully enjoy the production here (sometimes you can't barely hear the individual instruments), but I guess it was an artistic choice. I can live with that.

Vocals are excellent and fitting for this genre IMO (although the delivery is seriously stereotypical, especially the forced lower register), the guitar solo is tasteful and...quite beautiful. You guys are far too talented!

Great vocals and though some of the mixing levels weren't optimal, I was definitely rocked by this one. Really cool ending, and the track flows really well. Pretty nice stuff overall.

A pretty good emulation of those fantasy-metal style bands, although the vocals give it a uniqueness. The production is of course rawer than most folkish metal pieces I've heard, and I have to say, the result is actually desirable. Things aren't as clear as they should be, but who says they should be. It gives it some darker areas that I enjoy a lot.

The vocals aren't the strong point, and the lyrics are standard epic medieval fantasy fare, but you know, nothing ever feels wrong.

I'd trade the first section for the dungeon section anyday, but both exhibit a huge amount of talent and effort that never sounds laboured, stale or amatuer. I don't know about the best, but I think this is possibly the meatiest treatment of the Zelda theme (+ dungeon theme) that there will ever be.

That's not QUITE how it happened. It was more like:

An evil bitch forced a poor guy to sing cheesy lyrics to a perfectly good piece of music. Just because she had a vision.

Someone, put a price on her head!

Also, speaking of Music of my Groin. How many of you have heard that song live - in Shael's apartment in New York?

Have you listened to Music Of My Groin yet?

This mix reminds me of Jesus Christ Superstar.

Usually i just lurk the site and check out the new music that comes through but i just had to register to drop my praise for this song.

This is with out a doubt the most PHENOMINAL Legend of Zelda remix of all time! I genuinely cant imagine anything that could ever top this. You've got me jammin this out at work, singing it in the shower, blasting it in my car.

Honestly i think i can die happy, and they better be pumpin this song on my ride up to the pearly gates o_o

Keep up the great work!

I loved it. By the way, did anyone else think of Evanescence in the part starting at 1:36 and ending at 1:57?

First mix I have downloaded in a while and what a goodun it was. I didn't think it was too long at all - I love long songs that keep giving me more of what I want and leave me feeling more satisified after listening than a short 3-4 minute track that I end up replaying.

The lyrics were fine and sung well - there was one point where it seemed to me that the music, the male voice and the female voice were all contending to be in the front rather than balancing properly but it passed fast and ceased to bother me.

Good stuff, I got really annoyed that my guitar was in for repair when first listening to this because I really wanted to pick it up and join in

When I first listened to this song, it didn't work for me. But after listening to it for 3 or maybe 4 times, it started growing on me, and now I think that it is a pretty sweet piece of work.

But I have one complaint: the song is toooooo damn long.

It should have been made into two seperate songs; one with vocals (the part up until 3:23), and a second, instrumental one featuring the dungeon theme.

I did not like this song's vocals, otherwise the music was great. The vocals were rather off-key sounding to me. Enjoyed everything else though.

"Oh, Hyrule, I stand on guard for thee."

I just feel like standing and saluting a crowd of patriots while singing this. It feels like a national anthem.

The medley of the title track and the dungeon fits well. The panning techniques with the guitar and the drums remind me of some of goat's tunage. Excellent! Keep releasing these types of songs.

I love this. It's gotten me into this genre. I listen to it in my car real loud with the windows down.

Another great mix by GO.

The first verse is the 'most' out of place. I was waiting for some vocals at the end during the dungeon theme that (sadly) never came.

Just pick this up. It's good stuff.

Her skin, white as the cleanest snow
Eyes closed in tranquility
Her heart is calm, her breathing slow
On the altar, sleeps for eternity

The Valiant will be their sacrifice
To breathe life into the cursed remains
And so, Dragmire shall arise
From ashes covered with blood stains

So maiden, tell us thy secret please
About the smile on your pale lips
"He's here!" she whispers now with ease
"Our future lies at his fingertips"

[Chorus]
Your highness, will you ever awake?
Or will you sleep 'til the end of time?
We'll follow you through life and death
Forever faithful to the land of legends

You chosen one, bearer of Master Sword
An elven boy, Hyrule's own godsend
Pursued by the enchanted horde
They'll hunt the Triforce 'til the end

Go warrior, search for the golden land
Find Power, Courage and Wisdom
Don't fear, take Princess by the hand
Be brave, and save our kingdom

"Link, be careful! May the Triforce be with you." 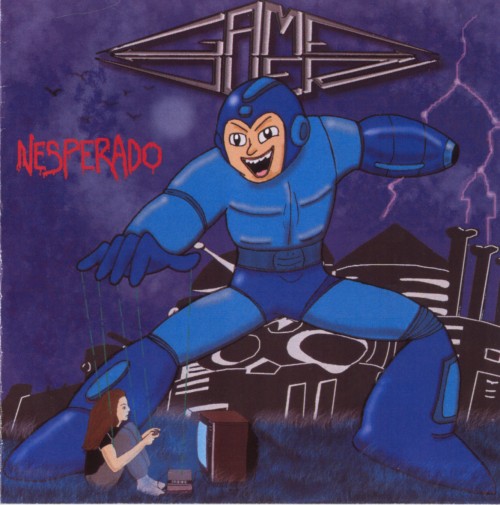