I was glad to see Unsung Heroes shine some light on a few games I've never played, but want to - it kinda serves a purpose that is almost the opposite of nostalgia, where you get a "preview" of the game in a sense, and a good arrangement can often make you want to explore that game. In this case I'm definitely gonna check out Luminous Arc at some point since I love SRPGs to begin with, and the music sounds amazing; Deia & OA have teamed up for a lovely vocal duet ballad on the 'prelude' theme, complete with beautiful harmonies & vocalizing. OA writes:

"This song has always been one I've been drawn to since I first heard it, and the melody itself had a very lyrical nature to it, and writing the lyrics was easy. Reading the lyrics, I couldn't imagine them sung by anyone but Deia, though somewhere along the line she convinced me to sing a verse and do some backing vocals as well.

One awesome surprise was some additional wordless vocals Deia added to a double time section I had done. She had written her own melody, and the way she phrased everything really resonated with me. I added some response vocals, and once it was complete, it ended up being my favorite part of the song."

"Andrew aproached me to sing on this, and I found that the imagery of the lyrics really called out to me. The chorus was surprisingly difficult to sing, and took the longest to get good recordings. My favorite part is easily the lyric-less section, which I recorded whatever felt right. After convincing Andrew to add his voice to the mix, I was amazed with how he intertwined his own melody in mine. I love how unrestrained that section feels."

This has an almost Lynchian, Angelo Badalamenti feel to it, esp. on Deia's vocals - that floaty, echoey, dreamlike cadence & timbre. There's also an element of Celtic folksiness that's modernized by the accompaniment at times. There are moments of true beauty here, although once or twice I was pulled out of it for JUST a second by minor intonation issues. Nothing way off, just enough to briefly distract - which wouldn't be possible in the first place if I wasn't entranced by what A's O & D have put together, a transporting, unabashedly vocal ballad that really soars.

Vocals have a strange bit of an echo to it, and while it wasn't bad (I actually liked the idea, makes it that much better in the arrangement of the ballad), it was tough to make out some of the lyrics at times when I didn't listen intently. Overall music, including the piano, was great, and this track did the album proud in my opinion. Cool vocal mix.

This has a nice calm feel to it, almost cathartic. Andrew's vocals have a weird quality to the recording to me here, could it be the mic setup? I love it in the beginning when they're used in the background - he has a surprisingly good voice and it's used to good effect in the song. Deia does a great job here too, which isn't so surprising considering the song was built for her it seems. The acoustic guitar and keys really help set the stage for the light relaxing slow summertime feel.

I like it a lot, great job by the second judge couple!

Listened again, and I wish I could get past it... But that reverb sounds way too echo-happy to my ears, like a free "small bright room" preset. If it were softer, I'd probably really dig this (and the project title song)! :/ I love the idea!

I like the mix, though I wish Andrew's vocals were a little more dry -- I feel that some amount of emotion is clouded by studio magic, and Andrew has the chops to sing without it.

I'm glad to see more duets on the site -- keep up the good work, you two!

I'm usually not a fan of vocal VGM music or high-pitched vocals, but this mix is completely amazing. I really can't express it, but there's something ethereal about this song. Wow.. just... wow.

I first heard this mix a few months back when Unsung Heroes came out and I was instantly captivated by the overall sound of the mix, especially the beautiful beautiful vocals which really captures the feelings (presumably) portrayed by the original source.

Listening to the original, I can tell its beauty was (in my opinion) flawlessly transferred to the remix and if one thing's for sure, it's clear a lot of love care was displayed towards the making of this track.

Thanks for producing such a nifty mix, OA/DragonAvenger 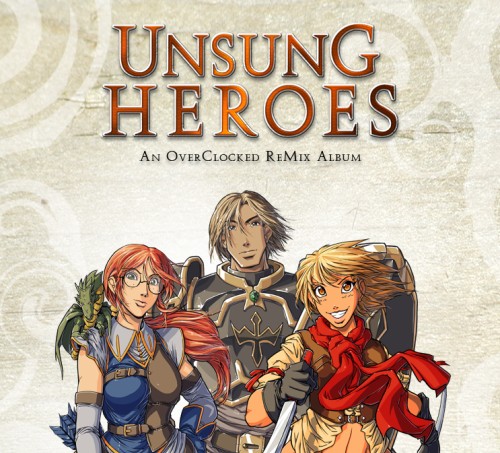