With a more aggressive, upbeat vibe comes Jakesnke17 (featuring a guitar assist from Source X), offering an eclectic electronic arrangement that has elements of d'n'b, industrial, dubstep, chiptune, big beat, and who knows what else. The transition at 1'56" is pretty damn dramatic, dialing things back into a mellower chip/synth halftempo breakdown, until 3'07" picks things back up. I'm genuinely surprised that these elements, with this structure, all came together into as cogent an arrangement as this ended up being - kudos for simply making it all work, for one, and then double kudos for making it sound great, on top of that. Eevee director Theory of N writes:

"Jake has yet to let me down with any of his tracks and I knew I had to have him on Jolteon. No track from the original Pokémon games is more energetic than the gym battle theme and he somehow managed to pack even MORE energy into his remix."

Not much else to say; Larry informs me that Jake originally had the guitar parts implemented with samples, so the collab w/ Source X helped amp that specific part up a bit. The structural variety here is handled well, and in just four minutes Jake covers a lot of musical territory, partly because of the quick pacing but also due to the contrast between the aggressive upbeat portions and the happier, swayin-in-the-breeze breakdown that offers a brief respite from the storm. An elaborate, enjoyable mix that evolves quite a bit over time, taking the theme of the album to heart in a very tangible sense!

This genre really works well with the Gym Battle theme from the original Pokemon. The guitar solo seemed a little out of place, but the fact that it was only for a small portion of the track keeps the guitar from being too much of a distraction. I almost wish Nintendo found a way to rearrange this battle theme in a way that is similar to this remix for a Smash Bros game.

I'm a big fan of the eevee ep; such a great album in such a short time! As a genre fusion track, it's very entertaining to see all of the different styles you used, but DnB and dubstep appear to be the most prevalent ones. I'm not much of a dubstep guy, but even I can appreciate the wubs in your mix! I love the way you handled the lead synths around 1:20, too. Great job!

You’ve made some interesting creative choices for this one, and I wholeheartedly approve. Looking at it in the context of the Eevee EP, the buzzy synths and electric guitars are, of course, a way of representing the fact that Jolteon's the electric type. However, I’m glad that the electric guitars are limited in their usage (sorry, Source X!), if only because it provides contrast with Brandon Strader’s Flareon track, Ember, from the same EP. In your defense, Source X, when the electric guitars come in they work very well. In conclusion, I like this one a lot. Magnificent work!

This album certainly has it's share of great tracks that combine chip tune with a lot of things that I haven't heard much of before, and this one featuring some Deneb and dubish industrial beats is an awesome example of that. You've got the light melody of the Gym battle in the chips, and then everything else seems to add to the intensity that a battle like that should have. Digging the breakdown section as well. 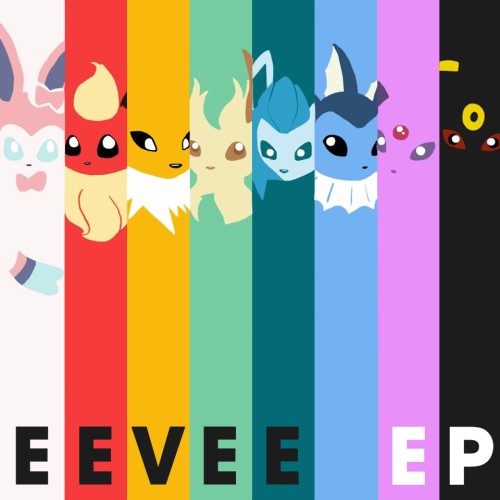