We introduced the OCRI album series last year as a means for OCR to be a bit more agile and release albums that may or may not have originated with the community, but which deserve both a spotlight & a permanent home. Since then we've released Audio Engineering: A Tribute to Cid, Futebol Arte: World Cup Tribute EP, Shuttle Remix (arranging DaMonz' soundtrack to Shuttle Rush), and now for your listening pleasure we've got Dungeonmans Remanstered, a FREE arrangement album featuring 14 mixes of Andrew "zircon" Aversa's soundtrack to Dungeonmans! Buy it on Steam if you're into rogue-likes, old-school RPG's, and, well... dungeons. zircon writes:

"Ever since I became a composer, I've wanted to write a soundtrack to a game like Dungeonmans; something that hearkens back to my days of playing classic 16- and 32-bit RPGs. The developer, Jim Shepard, shares my love of these games and their soundtracks, not to mention that, while he's not a composer himself, he's very passionate about game music. Working on this project was thus a fantastic creative experience and the final result is, in my opinion, my finest score to date.

With that in mind, anytime someone takes the time to create an arrangement or interpretation of your original work, it's a wonderful feeling. So, to hear so many talented folks take on Dungeonmans is truly special. I was absolutely thrilled at the quantity and quality of remixes from both the friends that I personally invited, as well as the musicians who submitted to the contest. From hard rock and funk to EDM and chiptunes, I absolutely love every minute of it."

McVaffe, Joshua Morse, WillRock, & more... even if you HATE literally everything about dungeons OR mans, you need to check this album out for the amazing musics. And hey, that Sir Jordanius guy is on there too, and we've got a mixpost from him to celebrate! If I could describe this arrangement by invoking a comparison to a single game's soundtrack/style, that game would be Katamari Damacy. This takes Andy's original and launches it into a fanciful, 1970's outer space trip filled with funk, flavor, & intergalactic love. Sir writes:

"No epic novels for this one. Keepin' it straightforward, this was another case of me busting me ass in one[ish] day. I saw the Dungeonmans and Flexstyle remix competition threads and didn't have much time due to some family stuff lately. I never got around to finishing up my remix idea for Flexstyle's comp (I'll still see about it after I catch up with a shitton of OCR projects), but while listening to the Dungeonmans OST, I really fell in love with some of the chord progressions and time signatures. I think there's been some discussions about this in the Community and on a Talkback, but sometimes certain people will automatically hear certain potential ideas in a source (i.e. some people hearing metal in Mega Man where other people would hear bossa or EDM).....

I didn't change too much, really (in my opinion). I just listened to the composition Andrew laid down and immediately found inspiration to funk some shit up. On the second-to-last day, I had a few hours to myself... as the clock kept on winding down, I kept thinking "yyyyeeeeaaaahhhhh....... I should probably stop wanking on Runescape and see about this here Dungeonmans." I had to leave for the airport to shuttle some relatives back and forth the next morning/day and came back thinking "fuuuuuck fuck fuck fuckkkkkkkk, I need to do a final mixdown of this shit ASAP and still record horn stuff for the Flexstyle thing... fuuuuuuuuuuuuuuuuuuuuuuuuuuuuuuuuuckkkkkkkkkkkkkk, I'm missing parts!!! AAAAW, just fuck everything... sing some extra silly vocals, do one last mixdown, and call it a night! BING BANG BOOM!"

DISCLAIMER / FBI WARNING / FDA NOTICE: To project directors or people that I "owe" collabs to... please cut me some slack... sometimes it's just easier to knock out some funk stuff like this, especially as a means for relieving stress and such. :0"

Also Space Channel 5, for that matter :) Sir J's been pretty prolific lately, and has been laying down all of the funk with none of the junk, i.e. every new mix maintains his high standards and lets it rip with energy, musicality, and style to spare. Andy concurs:

"When I first heard this remix, the very first thing I did after finishing it was listen to it again. And again. Jordan is of course an incredibly talented, prolific, and versatile remixer, so hearing something this good shouldn't have been a surprise, but still... wow.

I had a giant smile on my face the whole time as I heard the way he worked in multiple themes and motifs from the soundtrack. Badass groove, funky fresh vocals, hot brass playing, and - dare I say - killer chops all around. Bravo, Sir J."

Killer chops, perhaps... but are they studio chops? It makes all the difference, you know... bell bottoms, vivid colors, large hair, and cosmic karma all radiate outward from the nuclear furnace of this mix's core, meaning that it comes highly recommended to all those who enjoy Coolio-approved fantastic voyages & great music. Grab it, grab the whole album, spread the news, and consider picking up the Dungeonmans OST at OverClocked Records!!

Very groovy and funky -- expecting no less from Sir J. I really like how you could incorporate more electro/chiptune elements here and there with the funky stuff. Percussion work is excellent. The slower breakdown is a fine addition as well. Perfect production, great groove, super nice track!

Mm-hm, yes, that was indeed both funky and fresh. All the grandeur of a quest-ridden dungeon and all the groove of one notably knightly Sir J. Hard to not grin happily at some of those brass hits and drum fills. I like it a lot!

Holy hell man, this is great. I'm getting some serious Mario Kart 64 vibes (particularly Toad's Turnpike) from the chord progression, this is so silky smooth. For a track that was thrown together so hurriedly, it feels remarkably focused.

If this is any indication of the rest of the soundtrack/remix album, I clearly need to check it out.

I'm getting SERIOUS Jamiroquai vibes out of this one. Super delicious stuff here!

Definitely hearing some Katamari style in this arrangement with the playfulness and vocal "lala"'s. This is fun to listen to and a great way to present the album, which I'm looking forward to hearing more of soon.

How do you find the time to do this?

We groovy! All night! In the dungeon! Laaaaaaaaaaa (falsetto)

[x2]
We groovy
All night
In the dungeon

We groovy
All night
In the dungeon 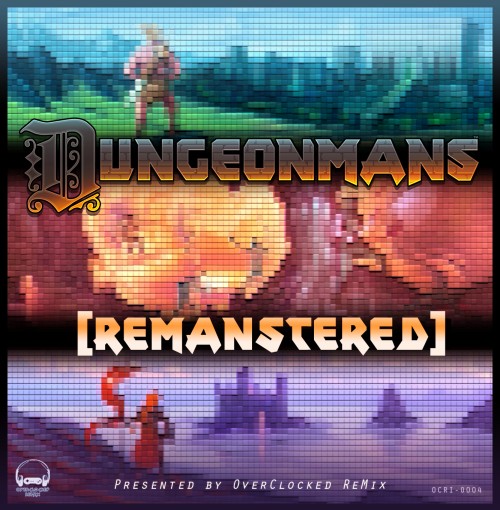