HomeReMixesTangledeep "Dreams of the Deep"
|

ReMix:Tangledeep "Dreams of the Deep" 3:16

Tangledeep being a roguelike homage to Japanese RPGs from the SNES/16-bit days, with an original soundtrack composed by Andrew "zircon" Aversa and additional tracks by Grant Kirkhope, Hiroki Kikuta, and Norihiko Hibino! I know, right?? Available now on Steam, coming soon to Nintendo Switch, and even if you HATE amazing RPGs, you probably love amazing RPG *music*! This album of 20 ReMixes from Dale North, DaMonz, Doug Perry, Flexstyle, Joshua Morse, timaeus222, WillRock, & more features jazz, rock, dance, metal, and a chill-ass yellow frog playing guitar on the cover thanks to the artistic talents of OceansAndrew!

Still not convinced? We've got a lush, stirring promo track from PRYZM (Nabeel Ansari) & DrumUltima. Nabeel just launched his new artist/branding with a debut album that you also NEED to check out:

"I'd been watching zircon work on Tangledeep for 2 years and was floored at the compositional quality of the soundtrack. Clearly inspired by the old era classics, but with his distinctive compositional voice, utilizing his EDM and jazz fusion background for a lot of the part-writing. I think that's really the best place to be, honestly. It's great to imitate and nail an aesthetic, it goes a step beyond to assimilate your influences into a unique, original approach that remains true to who you are.

This track was super fun to do. zirc asked me about doing a remix for the Tangledeep ~Arrange~ album and I said, absolutely! I really liked this dungeon theme and sorta just rolled with it. I asked myself what this track would sound like as an actual modern version, as if zirc himself were doing it, and took that direction. The result is a lot of shiny produced acoustics with some elements of electronic polish and an overall ethereal glue that holds everything together.

I had Doug Perry (DrumUltimA) do they keys solo that comes in at 2:00. He actually recorded 4 different approaches to a solo, and they each had a unique feel to them. I ended up splicing parts from all of them into one solo, crafting a narrative that sort of goes from sparse to dense with a linear arc, and then comes to a meditative sort of vamp. The stuff he came up with is great and I was super happy when he sent it over, considering how short notice the request was.

I think this mix in particular marks a turning point in the quality of my music. I spent a lot of time in college ignoring production so I could spend more time learning about harmony, part-writing, counterpoint, orchestration. Finally in the last year, I've been getting back to the production game, souping up my setup with new plugins from companies like Waves, Softube, and iZotope, and really just learning these tools to see what I have available to add clarity, punch, polish, and creative processing to my sound. And of course, my continuing 3rd year working as a sample library developer has given me access to more tools, as well as income to pick up a lot of stuff I've always wanted. In this mix, I use a handful of stuff from Spitfire, Spectrasonics, Heavyocity, Cinematic Studio Series, and more. This mix is 100% MIDI!

I think with this arrangement, and my debut album COLOURS, my music has entered a new chapter of much more oomph, air, and depth."

Not only does COLOURS have a fancy British spelling of "colors" AND amazing artwork of its own, it's got seven original tracks that show you what Nabeel has been up to and which effectively reinvent his voice as an artist - highly recommended! As for this mix, the source is gorgeous, and Nabeel's gone and made it even more gorgeous, really putting his string libraries to effective use and conjuring a wide, rich soundscape. There's also a very vivid use of cinematic percussion, pairing larger, epic drums with more subtle hits & hand drums. I especially dug the scraping, clacky hits at 2'04" - unexpected & distinct yet entirely appropriate. Piano is delicate and expressive, and the whole production has a sheen to it where nothing juts out at any wrong angles, but it's *also* still interesting & dynamic. Nabeel's production game has actually been pretty hot for a while, but he's definitely upped it; this arrangement shows it, with a nice solo assist from Doug, and if you want to hear more, COLOURS is well worth your time/money.

Congrats to Nabeel & Doug for this mix, to Andy for developing a successful game and original score, to Nabeel on HIS new original album, and to the entire Tangledeep ~Arrange~ crew on a great musical tribute to a great soundtrack!

Hahahaha seriously tho, this is a pretty cool mix. Really nice humanisation on all of the organic instruments, and a really nice arrangement to boot. 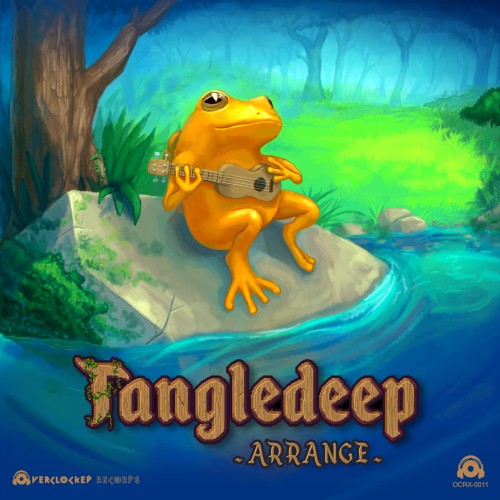