HomeReMixesThe Legend of Zelda: Ocarina of Time "Lullaby for a World"
|

ReMix:The Legend of Zelda: Ocarina of Time "Lullaby for a World" 4:18

Emunator & Flexstyle submitted this sample mix as a freebie, and it puts a lovely spin on "Zelda's Theme" that hits hard but also pulls back for some softer, sweeter moments. Emunator (Wes McDonald) writes:

"Perhaps no other artist has had more personal impact on me than Porter Robinson, who grew up with many of the same cultural influences as I did and channeled that inspiration into some truly visionary music. His confluence of nostalgic sounds, emotional melodies, and modern electronic production has stuck with me ever since Worlds dropped in 2014. Knowing that Porter is a fan of the Zelda series, I've always had a vision of fusing his style with "Zelda's Lullaby," but never had the production skills to make it happen.

Years later, I had a serendipitous encounter at the Phoenix Symphony with my long-time friend Flexstyle (who, coincidentally, attended a Porter Robinson show with me years prior)! He told me about a remix album he was working on called Club Ocarina and asked if I was interested. After a few false starts of my own on other sources, a last-minute drop of "Zelda's Lullaby" opened the doors for this idea to become reality. I put together a 30-second demo of the chorus, Mike approved of the direction, and 1 month, 3 studio sessions, and a whole lot of tea later, we had a finished track!

This is my first time collaborating in-person on an arrangement from start to finish. I took the lead on arrangement and part writing, and Mike generally took the reigns on production, but since we had the luxury of bouncing ideas off each other in real time, the end result was a truly collaborative effort that perfectly captures my original creative vision, but at a level of quality that I could never have reached myself!

I also have to give a huge shoutout to my co-worker Marissa, who offered encouragement and advice for improving my left-hand harmonies during the piano solo at the end of the track (for all my years of playing piano, I've never actually sat down and written a piano arrangement before)!"

Wes's DKC mix back in June was a very successful foray into more straight-up EDM waters, laying the groundwork for this sweet collab & a take on a simple theme that coaxes a ton of character & life through rhythmic variation; album director & collaborator Flexstyle (Michael Birch) writes:

"Emu and I go back a loooooong time, back to the DKC3 album days (has it seriously been almost ten years?!?), but we haven't really ever done a proper collaboration. While I was directing Club Ocarina, "Zelda's Lullaby" got dropped by another artist who couldn't finish their rendition. I was bemoaning this fact to Emu, who then mentioned that he'd always wanted to do an arrangement of this track. We put our heads together -- literally, in this case, working in person together over a couple different weekends -- and this is the result. I'm really happy with how this beautiful thing turned out, and it's a really fitting conclusion to Club Ocarina. Enjoy this track, and check out the other 11 songs when you have a chance -- it's an amazing collection of music!"

This is OC Records' first partnership with Materia Collective, and it's for one hell of an album; if you're into EDM & Zelda, it's a no-brainer, but I think I can recommend it to just about everyone, really. Major props to Mike for coming through, to ALL artists involved for turning in some stellar interpretations (especially while working with shorter sources), to Seb/Materia for assisting with distribution/promo, to Dice for some spectacular cover artwork, & to DarkeSword for a typography assist; this is something we've been working on ALL YEAR, since January, and I'm thrilled to see it come together in 2019!

This definitely goes down as one of the most unique Zelda's lullaby covers I've ever heard. I dig it 3

Club Ocarina: An EDM Tribute to the Legend of Zelda 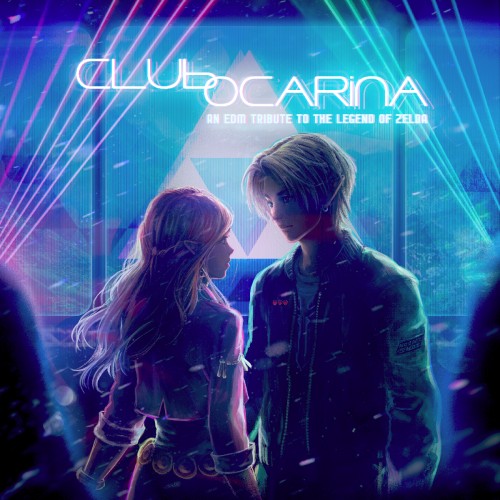