In our first game composer interview, we spoke with Tim Wright, aka CoLD SToRAGE, a prolific musician whose soundtrack work in games spans decades and consoles alike. For our second interview, we wanted to mix things up a little: for every composer who chooses to work primarily in video games, there are dozens more who might compose for one or two games, then proceed (or return) to work in film, television, or composing original standalone works. In 1997, Patrick Zimmerli composed the soundtrack for the PC game Evolution: The Game of Intelligent Life, a precursor to future evolution-centered games like Spore. It was his first and possibly last game soundtrack, but it's not that he quit making music: on the contrary, Patrick is a successful jazz and contemporary classical composer living in NYC and writing myriad original works, in addition to composing for film and television. We wanted to see what the one-time experience of composing for games was like for a composer whose primary focus wasn't game composition at all. Patrick was a little surprised when we contacted him out of the blue, but we feel that his answers to our questions were insightful, entertaining, and relevant to understanding more about the world of game music. 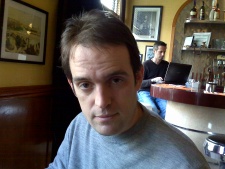 Your website, patrickzimmerli.com, describes you as a composer of contemporary classical and jazz. Could you describe some of what you've been working on in the last few years, and what your current focus is?

Perhaps unsurprisingly, it's been a mixture of contemporary classical and jazz. For the past couple of years I've been running a concert series featuring my 9-piece band (strings, jazz instruments, percussion) and written a lot for that. I've also been doing a lot of commission work, and getting involved a little in production as well, I just finished producing a CD for a classical cellist, of very old music (from the 11th-16th century) in contemporary-ish arrangements.

Currently I'm writing a symphonic commission for a music festival in Colorado; a series of songs for saxophone, electronics, percussion and piano for a new CD, which is more jazz/electronica-oriented; and I'm getting ready to record a set of pieces for piano that I wrote over the last couple of years, for classical pianist and produced by the eminent jazz producer Don Sickler. That will be recorded out at Rudy Van Gelder's studio. Rudy is a legend in the jazz industry, he recorded a lot of the Blue Note sides in the '50s and '60s, all the famous Coltrane records and stuff, so that will be a really great experience.

Finally, I'm currently producing a CD with two jazz pianists, Kevin Hays and Brad Mehldau, doing jazz takes on contemporary classical pieces. We're developing improvised arrangements of Reich, Glass, Pärt, Górecki, Strauss, Hindemith, some of my stuff—it's really unlike anything that's been done before, and they're both really amazing musicians. I feel really fortunate to be able to work with all these great people.

Zimmerli leads a 9-piece ensemble as composer & saxophonist for Emergence, a developmental concert series that transcends genre, based in New York

You've got some film credits to your name as well as a single game soundtrack, Evolution: The Game of Intelligent Life, published by Discovery Channel for Windows back in 1997. I'm guessing from your more recent body of work, and from your website, that you wouldn't really describe yourself as a film or game composer. Is this correct? Are those labels you would actively avoid, and if so, why? 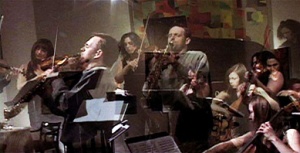 It's true, I have chosen not to focus on film or games. Of course a lot of great music has been written for film, and presumably games as well, but as a composer, I have a really strong vision, and when you work on a film, your job is to serve the vision of the director. That means you have to have a great deal of stylistic flexibility, and your primary concern can't be with your own voice.

So yeah, I guess I would actually avoid those labels. I mean, they really don't suit me, since that's a very small percentage of what I do. I'm more interested in developing my own ideas as an artist. If a director or creative team approached me to work on a film or game who is familiar with my music and wants my particular style for the film, that would be very interesting to me. So far that hasn't happened, but you never know what may come up...

It was a friend of mine from high school, Matt Blumberg, who was working as producer for the company that was making the game, who got me involved. I thought the guys working on it were very cool and I liked the scientific, educational bent. Matt produced the score, and he had the idea to make it very Eno-ish and ambient, which I think worked well. And the way the ambiances develop, with a sustained contrapuntal style, gives the score a unique sense of tension and release that I was able to bring to the project based on my classical background. So it was a lot of fun. But Matt moved on, and is no longer working in video games. I suppose that's why my career was so short!

Evolution's score has an ambient, somewhat new age feel to it, without being overly sugary or ethereal. There are myriad gurgling, pulsating textures and soundscapes that grow and "evolve" over time - was this linkage with the game's title intentional, or just a happy accident?

Does the game's score represent your compositional style at the time, or did you make significant adjustments based on the fact that you were scoring a game? Do any of your more recent works illustrate a link back to this score in any way? Are you proud of the score?

Well, as I said above, film and games involve being stylistically flexible, and so I did adjust my style significantly. I mean, I think at the time I was writing really fast-moving, abstract jazz—very far removed from the world of Eno! But then I've always liked working in different styles simultaneously, it's good to keep the work fresh, and I do enjoy the challenge, when the context is right and there are smart, creative people involved, of injecting something interesting and individual into whatever genre I am working in.

Footage and audio of Zimmerli's work on Evolution: The Game of Intelligent Life, courtesy djpretzel

As you know, OverClocked ReMix is a website dedicated to forwarding the appreciation of video game music as an art form. As a composer that scored one game and then never worked in games again, focusing instead on standalone, original compositions (not soundtracks), can you talk about this decision? Was it a conscious, deliberate avoidance of working in these industries, or did you naturally just gravitate more towards your current work?

Well, you know I'm really focused on my “art music.” For reasons stated above, the film thing never really appealed to me as a primary vocation—and there are plenty of composers all around who are dying to do that exclusively. It was similar with games—I knew there were things going on out there but I never made a conscious decision to pursue them, and they never pursued me either. But I do recall having a very nice experience working on Evolution. 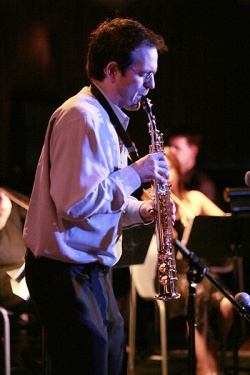 As a fan of both contemporary classical and jazz, and more specifically your original works available on your site, I personally would love to see game soundtracks feature more refined, challenging music of this nature. Independent films often do have soundtracks that fall into these categories, but video games usually aren't as lucky. Do you view your current work in contemporary classical and jazz as being incompatible with a video game setting, or do you think it could work? Would trying that be something you could rule out based on past experience, or something you'd be open to exploring, in the right context?

Glad you're enjoying my music! It definitely would be fun to mold my style to a video game, given the right project and circumstances. I think it boils down to the personality of the creative team putting the game together, what their goals are. If we have compatible aesthetic ambitions, I would think there would be some really interesting possibilities.

To draw a parallel, Japanese composer Dan Miyakawa wrote some music for a Nintendo game, Kirby Super Star, then promptly went on to focus on his own original jazz works with the Dan Miyakawa Ensemble. Like yourself, he does not mention his game credits on his site. Do you ever get questions about your work on Evolution, or find yourself talking about it with others? If so, what do you say?

You know, this is the first time anyone has even mentioned it in years! I had kind of forgotten the project ever happened, frankly. It's nice to be reminded of it, through the examples that you were so kind to send me. We did put in a lot of effort to make the music something vivid and interesting and good, but there have been so many projects over the years! Now listening back, I must say I like it a lot. Not only for the interesting sense of tension and release mentioned above, but I think the sound that we attained is quite distinctive as well, and holds up after all these years. That had a lot to do with Matt's excellent sensibilities as a producer.

If I don't mention it in my bio, it's just because I like to keep the bio as short as possible. There are a ton of great projects that I just didn't have room to list...

Finally, a very simple question: How do you feel about video games and video game music?

You know, I don't really play them, but I've heard really great things and I think it's fascinating. I know video games are good for you—they did a study about neurosurgeons being able to adapt to new technologies, and those who had played video games as kids far outperformed those that didn't! As for the music, forgive my ignorance but I'm sure that there's been some great stuff out there. I will try to go to OverClocked more often and get myself informed...