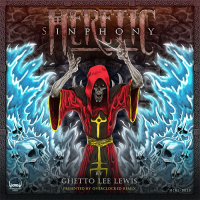 "This project started out with an e-mail I received about two years ago. What began with a remix of "The Cathedral" soon turned into a full-blown remix album of Raven Software's Heretic. This game is a classic first-person shooter from the Doom era, with some really good, but overlooked music. I composed and produced this album while working a full-time job (sometimes 60+ hours a week), while putting together a recording/production studio at the same time. It's been a long two years, but I'm finally glad this album is finally coming together and getting released."
– Thomas Nelson, Director

Heretic can still be purchased on Steam. Please support the official release::


Heretic Sinphony features 6 tracks by Ghetto Lee Lewis, arranging music from the Heretic soundtrack for DOS. It was made by fans, for fans, and is not affiliated with or endorsed by Raven Software, id software, or ZeniMax Media; all images, characters, and original compositions are copyright their respective owners.

This album was produced to help promote video game music, video games, Kevin Schilder's amazing compositions, and the talented musical and visual artists that contributed to this project.

Browse and download more than 3,400 free ReMixes honoring more than 900 games. Or download any of our free albums featuring more exclusive mixes.