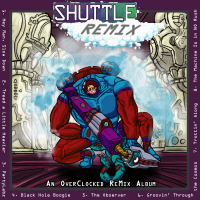 Shuttle Rush is the first game that I developed with my team, Takusan Works, and Shuttle Remix reinvents the game's whole original soundtrack.

This album was made by an amazing OverClocked ReMix strike team. They all did an outstanding job at reworking the game's music into something entirely different. Every arrangement is enjoyable in its own way, and brings a whole new set of colors to the soundtrack. In contrast with the somewhat hyperactive original music, most of these arrangements are relaxed and groovy, all in their own way. And even though the album might seem slightly short, it shows one of OverClocked ReMix's greatest strengths: diversity. Every ReMixer has their own style, and this album makes no exception. I am extremely grateful to every single one of them for their awesome work on this album, and I hope you will all have a great time listening to it!
– Emery Monzerol, Composer/Director

Shuttle Remix features eight tracks from seven artists arranging music from Takusan Works' Shuttle Rush. It was made by fans, for fans; all images, characters, and original compositions are copyright their respective owners.

This album was produced to help promote video game music, the amazing original compositions of Emery "DaMonz" Monzerol, and the talented artists that created this project.

Shuttle Rush is a fast-paced, old-school 2D platformer now available on the Wii U eShop!

The main character, space taxman Bob, is stuck on a hostile alien space station, and is running out of oxygen. The goal is simple: escape with your life. Fortunately, oxygen vending machines are scattered across the whole station. Using those will be mandatory to reach Bob's shuttle in time.

Run, gather coins, sneak past aliens, purchase oxygen, and you just might make it. It definitely won't be easy though. Good luck Bob, and do Rush it!

Get Shuttle Rush on the Wii U eShop!

You can also purchase the Shuttle Rush original soundtrack on OverClocked Records!

6. Amphibious - "Groovin' Through the Cosmos"

Sources: "Rush for Your Life," "Race Against the Machine"

Browse and download more than 2,800 free ReMixes honoring more than 800 games. Or download any of our free albums featuring more exclusive mixes.