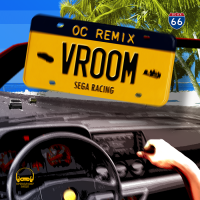 Special thanks to Robbie "AkumajoBelmont" Sabo, creator and initial director, and to successors Niyazi "DiGi Valentine" Somnez, Stevo "Level 99" Bortz, and Dustin "Theory of N" Lagaly. Thanks also to all our contributors past and present. Enjoy the ride!– José E. Felix, Director


VROOM: Sega Racing features 11 tracks from 14 artists, arranging music from several arcade and console racing games released by Sega. It was made by fans, for fans, and is not affiliated with or endorsed by Sega; all images, characters, and original compositions are copyright their respective owners.

This album was produced to help promote video game music, video games, all the original composers' compositions, and the talented musical and visual artists that contributed to this project.

Sources: Metropolis Street Racer - "You Can Love Me," "Let's Get It On Tonight"
Original Composer & Lyricist: Richard Jacques

Sources: Metropolis Street Racer - "You Can Love Me," "Let's Get It On Tonight"
Original Composer: Richard Jacques