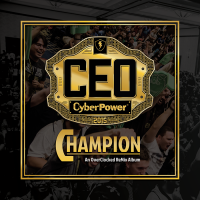 "I'm very excited and pleased to present CEO 2015: Champion, the latest in our series of fighting game community-focused albums. The FGC is one of the most passionate gaming communities out there; probably as passionate as OC ReMix is about video game music. I love getting involved with these big events year after year, gathering talented artists and giving the talented players a soundtrack to fight to. CEO 2015 promises to be one of the biggest and best of those events yet, and I think that Champion is going to capture the drive and determination that everyone competing is going to bring to the table. I hope everyone out there enjoys it!"
– Shariq Ansari, Director

For more on the CEO (Community Effort Orlando) tournaments, visit:


CEO 2015: Champion features fourteen tracks from thirteen artists, including both original songs and arrangements of themes from ten different fighting games that comprise the CEO 2015 tournaments. It was made by fans, for fans, and is not affiliated with or endorsed by any game publisher or developer; all original compositions and characters are copyright their respective owners.

This album was produced to help promote video game music, the amazing CEO tournaments, all the original composers' compositions, and the talented artists that contributed to this project.