Beatdrop and mp (Matt Pollard) last teamed up back in 2001, with the fantastic result being their Mega Man X3 House Hornet ReMix, a popular favorite here at OCR. Now they're back, and unlike the reunion of Will Smith and Tommy Lee Jones for the second, flagrantly cash-fishing Men in Black flick, this is a very good thing. Final Fantasy Mystic Quest (also known as 'Final Fantasy Lite') is the name of the game this go round, with hardcore electronica being the weapon of choice. Ear-punishingly sweet percussion is the highlight, but before I progress further, some background: Beatdrop and mp share more than just these two ReMixes (and l33t skillz) in common - they're both artists who contributed to Squaredance, an album of Squaresoft electronica with not only a clever name but some good tunes as well, put together by OneUp Studios and KFSS Studios. There's a few other familiar OCR faces on the album, and yes, I pop up briefly with a Cyan mix, then fade away like a stealth ninjitsu. Or something such. Buy it or review it at GameMusic.com - if you dig this mix and others by the contributing artists that are available here at OC ReMix, chances are it'll be worth your time to at least investigate (bzzzzt - end egregious hyperlink-crazy plugging mode - bzzzzt).

Righty-o, then - this track was actually started as a contribution to the album, so it's relevant to mention the context - apparently it was just a touch too late for the deadline. This is one of the rare tracks where my absolute favorite bit is the intro - usually intros are the literary equivalent of character development, setting the stage and introducing the principles but not really going anywhere. Given that for me the percussion was the salient appeal of the mix, it is most exposed and "freshest" when it's introduced the instant the piece starts, with a deadly hardcore kick that gets simply killa distorted percussive accompaniment at 0'15" with lovely gating and programming and even a pitch bend on the rapid-fire hit that comes in. The mix proper enters around 0'46" after some chopped-up wind ambience, and this is where the actual FFMQ material is at play, but I just love those intro drums - more robust than a triple-shot of espresso, speaking from experience. From a "responsible" perspective, that'd be my criticism - those portions of this ReMix that I enjoy the most are the ones that have the least to do with the source material. But if the original tunes can't inspire totally new bits & pieces of musical wonder, what'd be the point? Damn right. Anyway, the usage of brassy textures dominates the main melody in a unique fashion, not something you'd hear too often. It does work, which is saying something in itself, but never in a way that I'm 100% comfortable with. Fortunately, there's Kitaro-esqu synth lead doubling it, some nice delayed synth patterns underneath, breaks for variety, and a no-holds barred approach to mixing that doesn't let up. There's dsp and manipulation brought in often on the underlying drums, keeping them interesting (on top of being poundingly juicy), and the piece ends with the afforementioned brass riffing up - it's here that you'll notice the reverb being applied to this patch, which has a real short trail, like a small room patch or short plate. Again, interesting+deliberate choices made that give this a different identity than your average relentless hardcore techno track. A little more panache at the possible expense of being a little less accessible? Maybe. My guess is that, like me, you'll focus on the beats and subsonic bass and not mind. Good stuff, indicative of the overall high calibre work on Squaredance (I'm not obsessive about the red "e" like some, but I capitalize "OverClocked ReMix" weird, so go figure) - both the album and this behind-the-scenes, related "bonus" ReMix are definitely recommended.

Not a bad remix, rather entertaining actually.

The source comes and goes, with building parts in between. A good listen.

Some cool ideas and some great hard percussion, but otherwise i thought this one was kindof plodding. The melody isn't terribly exciting at this tempo, and i'm not sure the synths really match with the drum sound.

Gonna pass on this one, sorry guys.

Wow, a lot of people liked this less than me.

I thought this was fantastic. Flaws or no flaws, I'm just a huge fan of dark electronica, and this is one fine example of just that. There are a lot of interesting technical ideas throughout, and the ambience is really fitting of the piece and the melody. But I have to say my favourite section is at 2:00 when the track launches into a distorted electronic nightmare version of dark church organ style music.

I'm a big fan of this mix, and I have no problem saying that. There is a ton more good than bad here. Even tracks you deem flawed deserve to be loved for the sake of their quality parts.

Heh, FFMQ is a very important game for me (the first jcrpg I ever played and I loved it). I consider the source rather grand and I'm happy to be reminded of it. This mix showcases the melody's boombastic quality quite nicely. The more ambient break was quite cool, and I like the beat, and the intro. Unfortunately, the distorted (lead) synths don't feel well mixed, they just sound loud and abrasive - in a bad way, in my humble opinion. Also the ending is lackluster, it doesn't very unfortunately go anywhere. What could have been a great track now feels like a bit of a rush job. It's not awful by any means, but it just falls short of beeing a keeper.

Hoo boy, this is some real hard electronica, I almost blew off my chair. My first impression of this remix was the immense bass of the beginning beats, but then came the.....I don't know what to call it, but it sounded rusty or cheesy. It was first afterwards that the synth came back and played for real this time. I like the main melody of it, you will just have to listen to it two times to get into the dark and rough music style BD and mp is pulling here. Although I got annoyed of the scratchy noise the instruments gave off, I still couldn't help myself but bobbing my head back and forth. Seems like the beats fulfilled their duty.

w000t! I just love beatdrop and mp for this one

That kick really gets you listening, wondering what'll happen next, cool bassline behind the kick too! *waiting, waiting* WHOA! Fucking bad-ass percussion! Highlight of the song!

I'm surprised this is the only mystic quest remix here, the game did have quite the cool music

finally figured out why i love this track so much

I like this song tons. The baseline breaks your neck and the melody has an ominous feel (makes me think I'm climbing a tall mountain).

Beatdrop and mp worked together on this one together... and it shows. While Beatdrop owns the Techno genre (i.e. Mega Man), mp drops it nasty over classic FF-tracks.

Techno + Classic = ...well I'm not realy sure. But it's ill. If you like this, check out their other mix- HouseHornet

I like this song tons. The baseline breaks your neck and the melody has an ominous feel (makes me think I'm climbing a tall mountain).

Beatdrop and mp worked together on this one together... and it shows. While Beatdrop owns the Techno genre (i.e. Mega Man), mp drops it nasty over classic FF-tracks.

Techno + Classic = ...well I'm not realy sure. But it's ill. If you like this, check out their other mix- HouseHornet

Diggin this tune. While I'm pretty "meh" about the actual melody part of the song (decent, not terribly interesting), I like how this song is giving the vibe, "Yeah, this is VERY electronic, and if you don't like it, you can ____" The coolest part for me, is at 1:28 where it gets all ambient and chill. It's a nice contrast. The ending is a bit whacko though. I was totally expecting something electronic, but I get some brass upwards roll thang that sounds totally out of this style. Pretty abrubt, too. But otherwise, great work. MMmm. Crunchy.

I agree, beautiful song. Final Fantasy is a popular game. But I only know this. Quack!

I'm getting tired of people trying to make video games look like some kind of F*cking dance floor.

I don't want to dance, I want some decent video game music that -wasnt- made by someone smoking three different joints at once.

Although I remember most of MQ's music vividly, I couldn't recall this track. The sample quality is very good, and the entire piece is well-arranged. While I don't find it interesting enough to listen to by itself, it works very well for background music, or music while my attention is partially diverted. For some reason, that makes it more enjoyable for me.

Hmmm. I see people didn't think much of this track. While I will agree more could have been tweaked on it, I very much like it as it is. Nice and varied. Good solid beat and interesting if a little over-processed instruments. Some of it might however be due to my odd headphones where the reduced bass intesity etc. actually comes out auto-boosted.

Anyway I like it and I'm still listening to it.

I would just like to note that this song is much more enjoyable if you're familiar with the original version of it (which can be found on SQUAREDANCE). It's more of a remix of a remix than it is just a remix. 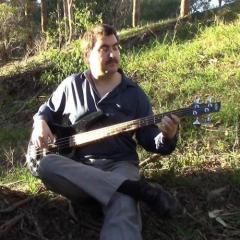 This sounds pretty cool. The percussion solos are a little boring, a bit more variety would be welcome. Looks like I'm in the minority for saying that though.

The orignal sounds of the song are strong but I feel don't achieve what they could have for the overall piece. The chopped wind sounds just before them are really cool though.