We've seen a lot of new faces around OC ReMix in the last several months, but analoq's keeps popping up, with professional, compelling new ReMixes often accompanying it. No complaints here - his latest is from "one of those SuperFX games besides Starfox", also referred to more specifically as Stunt Race FX. This was a fun little game that had lots of replay value for people like me who enjoy driving around and doing all manner of stupid things like bumping into walls at full speed, etc. Don't ask me to account for my youth, I can't :) I revisited it months ago with the power of ZSNES and realized that I probably had a bit more fun playing it than I should have, but it was still a good timekiller so many years later. analoq's got some sweet gear, and he puts it to good use here, mixing electric and electronic textures, guitar-based and synthetic, with simply awesome results. There's some great, underwatery processing, distorted bass, resonant 303 synth lines, and ubiquitous high-quality filters at play, along with ethereal pads and vibes, all mixed to a sugary perfection. The melody here is surprisingly melancholy and "serious", which takes on an added dimension from the original with analoq's treatment. The only thing that's not handled 100% smoothly is the very ending, which stops and lets the delay conclude things - this can sometimes work well, depending on the context, but I'd almost have preferred a fade or something with more closure in this case. But just listen to the processing, folks - listen to the sounds. There are less traditional guitar textures at play here that you won't hear elsewhere on the site that really work, the way analoq's used them. I continued to be increasingly impressed with the sonic quality and variety of his work; I'd like to see some less groove-based and more varied arranging approaches, but for summoning a pure mood and crossing all instrumentation t's and dotting all mixing i's, you can't beat this sort of vibe. Recommended.

A classic analoq style track (see what I did there). If you enjoy his other arrangements, then you will feel right at home here. Wailing synths, gritty guitars, and experimental percussion. Good stuff.

Can't believe I've never posted here, considering this track is an excellent rendition from one of my favorite 16-bit racing games of all time (and one of like two remixes of this game in existence, even after all these years. Good thing I found the OST has some awesome arrange tracks). It does have that very laid-back "Stoner Anthem" groove: I think it's the deliberate, slow pace at which the song moves along that gives it that "whoooooooooooooooaaaaaaaaa" feeling. Still one of my favorites on the site.

Well, it's hard to pinpoint what does it exactly. I think it's a combination of everything. The sloppily played guitar (no offense, I really like it) reminds me a little of Nirvana, and the tempo, the lead guitar, the bell leads and the slowly developing pads in the background all add to the psychedelic haze. It's all very calming. There are parts of the song that don't really fit into this vision I have of knocked out junkies sitting in dirty couches in a foggy room, but most of it does.

Funny this got bumped, I was just thinking about this remix the other day...

I've never had any of my music referred to as a "stoner anthem" before or since this remix. I wonder why it earned praise from some of Mary Jane's faithful patrons.

Not that I'm complaining, on the contrary, I'm trying to figure out how to duplicate this sort of response.

I just wanted to say this song has really grown on me. I love it more and more every time I hear it. If I smoked weed I know I'd have this in the background when I did. Thank you, analoq.

Loving that bass sound a whole lot, and the part is pretty funky too. I'm not huge on the melody that much, but I certainly am grooving. Some sections are mixed a little strange, like when the drums get filtered, but the sounds chosen are all really solid. I'm in love with that 303. Oh, what i'd do with one of those...

When it comes in with the full rhythm guitar backing, is when everything clicks for me, including the aforementioned melody.

Took a few listens, as it didn't immediately grab me (besides that superhot bass), but I've really come around to this one. Good stuff.

Nice. Don't know why this one has slipped me by until now. It's not all that easy to recognize this theme listening to the soundtrack, but I really like the mix. It has that satisfying "credits roll" feel to it.

Great arrangement of a great piece. It's got a very laid back 2 feel to it. I'm impressed with how well it takes the original and just runs with it, especially the seamless integration of the synth counter-melody behind the airy main theme. I also like the anagram title...Night Owl rearrange Thin Glow

Definitely recommend this one.

I don't smoke, but if I ever found myself high, I am absolutely sure that Mary Jane would get weak in the knees. Hot shit here. 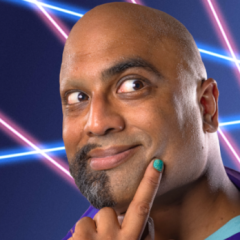 I had this looping for like an hour just now. I love it. Great stuff from analoq.

Ah wow everytime I hear one of analoqs songs it only grows on me and I love even more! Starting out with some distorted power chords but quickly moving into an extremely groovy beat, again analoq impresses us all! Stunt Race FX had some pretty crazy melody and I'ld say analoq chose the perfect lead for this song

All my awe are belong to you.

I'd love to explain how much I like this but well.

Throw some trancey synth in awith a distorted guitar and you get ownage!

Oh and btw the beginning nearly burns my ears off (headphones)

Is it me, or does this remix sounds exactly like the background song of the Fruitopia Commercial in theaters?

I'm not sure if any but me noticed, and that commercial probably doesn't even play in the US. So, has anyone living in Canada, or more precisly Quebec, noticed that?