"CHRONO CROSS ~Scars Left By Time~", "The Girl Who Stole the Star"

Ladies and gentlemen, I present to you the first OverClocked ReMix album of 2008, Radical Dreamers: Thieves of Fate. Directed by Bradley Burr, aka The Prophet of Mephisto, Thieves of Fate features 15 arrangements and 2 bonus tracks from Radical Dreamers. For those unfamiliar with the game, it's basically a side-story to Chrono Trigger that was never released outside of Japan. And, as with CT, it has a fantastic score by Yasunori Mitsuda. Those of you who've been with us for a VERY long time might recall that we had a flood of 9 RD mixes back in April of 2001, featuring tons of scene veterans; good times. It's awesome that we're less than a week into 2008 and already we're releasing another album. Keep in mind, this project's smaller in scope than VotL, but I spoke with Brad and we agreed that there's definitely a place for humongous efforts like our FFVII project and more focused initiatives like this. OCR is all about variety, and this project proves there's a place for albums that hone in on lesser known titles and don't try to fill up four discs of material, etc. What's here *is* great - the source material is classic Mitsuda, and the select artists that participated did a great job of reinterpreting it. Check out all the tracks at http://rd.ocremix.org/, or just start downloading the torrent immediately.

This debut ReMix from Taucer and Ross Kmet is a very emotive arrangement of The Star-Stealing Girl (Larry thought the mix title was cheesy but I think it's rather slick punnery, myself) and Time's Scar from Chrono Cross. There's careful attention to textures here, with a lullaby-ish vibe in the intro, transitioning to expressive ballad-style pop piano, moving from there to some really cool cross-panned stuttering synth work, with electric guitar beds, unobtrusive but interesting percussion and fx, and synth lead that's full of character. Both the arrangement and the production are subtle, rich, and most of all emotional - I think Mitsuda's one of the more emotional VGM composers out there, so it's good that Thieves of Fate is conveying that successfully. BGC writes:

"Beautiful textures throughout, I liked the movement in the bassline. Intro was a hair too long, but the track compensated for that with the thoughtful vibe. Piano at 2:00 was really pretty. That was live, eh? Nice work! Guitar was spot on, IMO, from effects to performance, to mixing."

Brad wanted to debut this project during M6, and while that's taken a bit of doing on our part (special thanks as always to aubrey for coming through on the torrent and Larry for myriad details), it IS sorta cool to coincide the two events, as we'll be talking about the album during our panels tomorrow at the convention. We'll be posting more mixes from the project and hearing more details from Brad after the convention's over, so you can look forward to more ToF in the future, along with other album releases that *should* see the light of day in the first half of 2008, if not the first quarter. Regarding the piece, co-ReMixer Geoffrey Taucer writes:

"It should be pretty apparent from listening what I did and what Ross did; I did the piano, organ, music box, and of course, the guitars, and Ross did everything else. The piano is live -- my first submission with a live piano, recorded on my S03. I really enjoyed working with Ross. This mix really lead me to explore styles I hadn't before, and expand my own abilities. I definitely look forward to future collabs with him."

Awesome. I think I dug this one a bit more than most of the judges panel - it's deceptively straightforward, and I don't mind that it takes a bit to develop, especially since the live piano (definitely a highlight for me) is done so well. We see a lot of beautifully played piano solos with a more classical flair to them, so it's refreshing to see something more pop-oriented, but still as flowing and articulate. This is a unique, memorable piece that does an excellent job of introducing the overall album. Download it here, now, or just head on over to the official album website and check it out there. Either way, great stuff.

This popped up in my giant OCR playlist of 2,000 + songs, and I wanted to jump in and say I really enjoyed it. It's very unique, and it's like...it's like a great soup, or something. You've got all these ingredients and you mix them together in really interesting ways to create a very interesting soundscape.

One of my favorite songs on the site. I first heard it while listening to Radical Dreamers, because it was a Chrono series game, so I was expecting something good. Then I came to this song. WOW. I heard the amazing piano solo at 2:00, and thought then that it was good, but then IT ENDS WITH A MUSIC BOX SOLO! As a smooth song that still manages to stay upbeat, this is a great one for OCR.

What an arrangement. Knocked out the park with this one.

This is a melody that can sound pretty archaic if you aren't careful, but that doesn't even seem in the realm of possibility from listening to this. On top of that, contrary to slowing down the melody, this always seems to be the fastest 6 and half minutes ever.

Wouldn't be surprised if there were people fanatically obsessed with this mix, as I am not far from that myself.

My faourite song from the album. It has so much emotion and soul in it. I love the way it ends is just priceless.

this mix is my all time favorite out of the album, its so dreamy like, (nostalgia kicking in), i have to agree with OA, everything in this mix is so well thought out, the instruments and arrangement just seem to compliment one another, everything fits sooo well, the piano solo was nice, very melodic, and when the guitar kicked in, instant win....

the musicbox at the end was really a good idea, wish there were more mixes with musicbox in them. 10 out of 10, its a must have

This is my favorite mix off of the Radical Dreamers project. I love the constantly-shifting textures and the slow burn that it has going. The synth programming is great, and anything with both rhodes *and* musicbox is a winner.

It seems that when I wasn't looking, the bass groove got improved too.

Nice work homies. I love it.

Everything from the piano to the music box to the rhythm guitar is just pure magic.

The issue with the ending has been fixed.

Fantastic! This has jumped to one of my favorite remixes in recent memory. The combination of different textures is just great. The stuttering synth effect is refreshing and catchy, and the excellent work on guitar and piano really "sealed" it for me (pun very much intended). Congrats, you guys! I'm listening to the project right now and I like what I hear.

Def a nice arrangement off an incredible source. The keys breakdown in the middle is def my fav part. Always sends shivers up my spine. Congrats on the first post Ross!

We should be able to fix it when Ross gets back home on tues.

i just noticed that this is not the same track as the one released in the project. the one in the project release is correct - the one on ocr is not. can you fix that, dave? or someone?

I didn't notice the fade-out had any problems in the torrent I downloaded.

Erm... I'm having issues with the download; it's cutting off at the end, just after the music box comes in. Only a couple seconds missing, but there should be a fadeout there. (Not sure if it's just me having this problem or what) 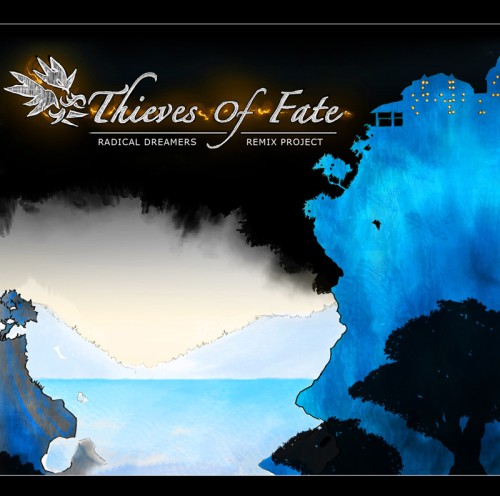