Three in a row! We wrap the Bad Dudes mini-flood with, appropriately, a cut from their latest album Resurrection, arranging the music of Symphony of the Night - which in turn had tunage from the original Castlevania, hence this mix's attribution. I'd like to start this writeup with a hypothetical - if I got an email from Yoko Kanno saying she'd ReMixed CV, and this mix was attached, I'd believe it. No shit. Which is not to say po's cribbing her style, but rather that this is the type of fresh, inventive composition I'm used to hearing on her OSTs. This is jumpier, more challenging work than po's usual groove, but equally as well-produced, introing right out of the gate with a classic motif transformed into a syncopated riff played by kick/chord hits, resulting in a mixture of jazz and d'n'b elements as hats and hi-pitched, diminutive snare enter. At 0'14" a ridiculously funky bass starts in, then po comes in on nylon guitar, the lead element here and played masterfully.

What follows is some fantastic jazz soloing that says quite a bit without leaving the source too far behind. I love how, at 1'42", things get almost Middle Eastern for the bridge, then at 2'00" (after a brilliant shuffling drum transition) flirt with a more Latin influence/sound - this is how to incorporate diverse influences in a solo part without sounding like you're taking a long walk around Epcot's World Showcase, and it's executed with extreme polish. The synth/brass chords stage left circa 2'38" further lock down a Latin vibe, then - just for fun - near the three minute marker, things go funkier with wah guitar, and the original organ hit riff from the intro is resurrected in a new, busier context. Then.... OH SHIT IT'S SAGAT!!! Mr. Yan chooses to close things out with a little SF2 cameo action, as the Thai flava invades the Transylvanian vibe and Tiger Uppercuts the Belmonts into kingdom come. You got your Capcom in MY Konami! Makes you wonder what a Capcom vs. Konami fighter would look like... I dunno, anyone familiar with both themes, which is hopefully all of us, is gonna get the ref, and it feels a little... tacked on? Certainly made me laugh, but the CV arrangement here is so epic that I would have preferred purity at the expense of comedy. It works well enough to not seem too musically non-sequitir, though, so the overall piece isn't compromised. And the overall piece kicks serious ass, breathing all sorts of life into a song that you've heard a zillion times - the album title 'Resurrection' is especially relevant for this mix - and extending po's already formidable musical reach even further. I just ate a metric ton of garlic naan at an Indian place last night, but you can never get enough garlic - classic joint, one of po's finest.

this is so amazing, even for OCR. But I guess it's not originally OCR--it's Bad Dudes!

This really has a funky tune.

Just realized that this reminds me of Mazedude with the 12-tone (I think?) chords and unconventional rhythms at the beginning. Chris should get his own tag. ;D

Can't believe I missed this one somehow, but I guess it happens when I spend so much time on panel stuff that doesn't get direct posted. Glad I got to hear it in the process of tagging, it's fantastic stuff. It ended up with a very unique set of tags, which pretty much describes how creative the mix is. Great blending of disparate elements to form something totally cohesive.

I don't dig the initial detuned riff that starts from the beginning... and actually in the first 30 seconds I was worried that this would continue throughout the song and be awful, but it quickly redeems itself.

The mix of odd synth sounds and fantastic guitar doesn't mesh well for me but what's good is so good that it's totally forgiving. Really enjoyable song.

What the hell!? This is pure awesome. I'm so gonna cop this style for whatever I do next. The jamming potential is endless!

It was good. Not my favorite by you, po!, but I like it. A couple of parts are pretty smooth, and as always your work is very unique. You're in a class all your own. But, so far, Nothing is going to top your (Mega Man 3: crystal potion) mix in my books. Not for a while.

I like the new direction the drums take around 1:40

THe old direction was good too, but this is a refreshing up tempo.

Is most of it live recordings? Whether or not they are the quality is solid I llsten long time

Sweet! It's nice to hear real bass for a change.

Rad stuff. The breakbeat-ish drums add something new to the usual po! smoothness, and it fits well. The only part where it goes overboard IMO is the moment just before 2:00.

Love the nylon guitar, as it adds a certain latin element to the mix.

Now that I think of it, this remix would fit into a Ridge Racer game, especially RR Type 4, perfectly. Considering that RRT4's soundtrack is one of my all-time favourites, this should say a lot about how good I think this is.

Now take the Sagat part and make it into its own mix. Go, po!

I'm more into old school DnB and Glitch, It's not bad just dosen't feel Castlevania for me though then again anything thats been Techno/Electronica in ACTUAL Castlevania games isn't very good. I didn't mind the acoustic part kinda reminds me of a Super Mario mix on the site you should look it up XD it's not bad just one oppion on the other side of the chain.

YOU GOT YOUR CAPCOM IN MY KONAMI!

Really loving the guitar work you've been doing, very tight stuff. Do an album already, yo!

Castlevania: Symphony of the Night - Resurrection 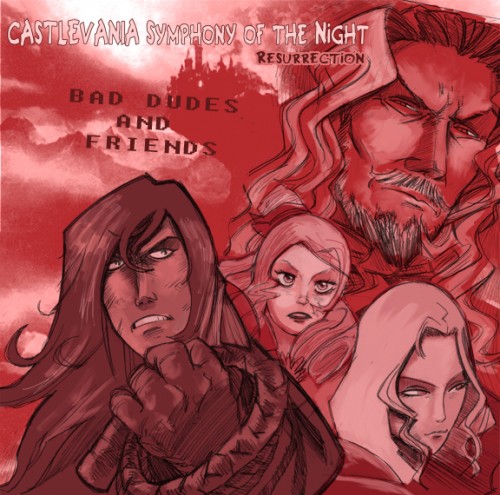