I'm writing this live from PAX 2009, where we're getting ready for our panel. We met up with Stemage and Dan yesterday for some TMNT-bus photo ops, checked out the Dream Build Play 2009 booth where Kaleidoscope (soundtrack by AnSo) was featured, and watched Larry eat "simmered tripe" @ Maneki. Good times all around, though in the meantime the site's been teetering on the edge of posting ReMix #1900, and now is finally the time. We'll be updating the main site torrent tomorrow, but in the meantime Beatdrop's here with some truly hot Vectorman action.

"I present to you OCR's very first Vectorman remix.  It's pretty much the only thing musically creative that I've been able to accomplish since I released 'Revolution', so you should all feel very, particularly lucky.  Needless to say, I've been wanting to do this song for quite a long time, but didn't come up with a good arrangement until now.  I get the feeling that I say that a lot, but that doesn't change the relevancy!

Anyway, herein lies a humongous side-chained bassline, fat beats, some weird distorted pseudo-synthetic sounds, sweeping leads, Attention Deficit Disorder transitions, and more of the fun and games that everyone has come to expect from me.  I altered some of the notation of the original song because I couldn't seem to get "Show Me Love" by Robin S. out of my head while working on this.  In fact, I was really tempted to find an acapella and turn it into a mash-up, but I'm pretty sure that would be simultaneously obnoxious and unlawful.  And that's all I've got to say about that."

Merriam-Webster says that a vector is "a quantity that has magnitude and direction and that is commonly represented by a directed line segment whose length represents the magnitude and whose orientation in space represents the direction." Can you imagine a MAN having such powers?!? Neither can I, really, but Sega did what Nintendidn't and published BlueSky's platformer with its very green & very spherical protagonist back in 1995. It had some good tunes by Jon Holland that Dain's done Great Justice here with a hard-hitting, aggressive electronica mix. What, you were expecting fluffy bunnies and ambient string pads? C'mon, this is Beatdrop; there's of course meaty beats, in-your-face synths, and some really slick use of distortion for a galvanized, electrified sound. Fans of Dain, Vectorman, electronica, and "awesome" should all be very, very happy. We've gotta get rolling to our panel, but whether you're familiar with the game or not, you need to experience 'Overflow' yourself. 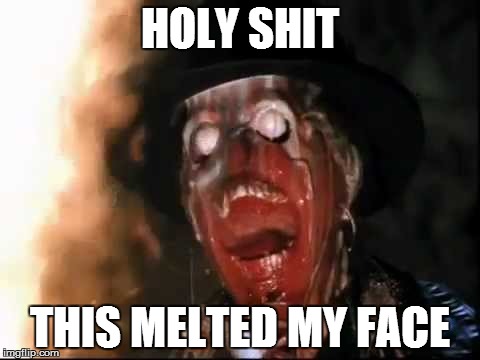 Seriously. This is SO AWESOME

Beatdrop is here to PUNCH YOU IN THE FACE WITH SOUND!

This is one of the most badass, hyper-compressed, head-exploding tracks to EVER grace OC ReMix. This track is AWESOME. And the way Dain fleshed out the theme made me completely forget how unbelievably barebones and spartan that source tune was until I revisited it.

An absolutely amazing, transformative job on this.

This is pretty fucking awesome! Love the beats and that bass synth is soooo... dirty and in-your-face, especially in the intro. Glitching is well done too. I think the mix gets a bit overcrowded in the very last section, and I would have loved there to be more section where that awesome bass was exposed more. But this is a minor gripe.

We need more of this type of stuff! Dain, you haven't posted since 2009, what's the holdup?

Punchy, effective and melodic approach to the gritty techno that beatdrop has made a signatire. While I like clean and slick techno, there's something about the 'wall of sound' combined with grittiness that works wonders with the material. The beats (of course) and the varied synth work are fantastic in this, but to single out only a few things really doesn't give it the credit it deserves. It's the culmination of everything, moreso than other types of remix, that gives this so much life.

It has a sound and a pace all its own, and it's great to see that sort of continued interest in musical diversity from such seasoned veterans. As fresh and as awesome as ever.

This feels a bit more accessible than some of Beatdrop's other work for some reason, but it still has all the other things that define his style - massive beats and synths, a wall-of-sound approach to mixing, and some really insane glitchy effects (the stutter at 1:12 was especially cool!)

To be honest, most of your music is so loud and intense that it almost gives me a headache listening to it... but, in a good way

This would feel right at home in a rave/club setting with the volume/bass pumped up to max.

If adrenaline had an on-switch, this would be the trigger.

Put this on for the first time over Thanksgiving in the middle of an unheard-remix binge. I promptly stopped what I was doing and set this on repeat. For upwards of three hours. I slept for more than 16 hours the next day. There may have been a correlation (more than could be accounted for by the tryptophan in the accompanying turkey binge).

Now that my eyes have mostly contracted, I've given this a comparison to the source. It's all there and easily identifiable - perfect for nostalgia - but completely re-engineered and re-timed. To the former: while still evocative of the source, the sounds, the beats, and the effects (a highlight being the key-hanging/morphing effect that starts in at 0:45... chills of power down my spine) are distinctly original. And incredible. But the latter makes the remix as much as the former. The source leads from one section into another without pause. Here, for example, Beatdrop inserts the initial buildup (and layering instrumentation), and then the slowdown from 0:31 to 0:43 (with slow decay). Then the drag-out and slow buildup through 1:12. Completely re-timed, completely YES. That, along with the following let-offs and full, progressive comebacks absolutely make the piece. With a full onslaught that brings everything together at the end... and victorious decay.

This is calculated retribution perfected.

"Intense" is definitely the word I'd use to describe this remix, too.

I probably wouldn't have recognized the Robin S. - Show me love influence without reading about it in the write-up, but since I know what to look for now, I can see how you used it.

I have been listening to this mix for a while, but didn't have time to post my thoughts until now. The mix is fantastic. It lives up to the awesome that is Beatdrop! Your work just keeps getting better and better

. Hopefully we will hear even more from you in the future

This is a really catchy tune and it feels like it is going punch me in the face any moment.

::slaps myself:: Wow, I really have been slacking off as far as posting on reviews. Every time Beatdrop or Rayza submit a track, I almost cream myself. lol KIDDING OF COURSE, KIDDING.

I LOVE BEATDROP AND THIS SONG. 'NOUGH SAID.

All I have to say is "Holy crap, this is awesome!"

This kicks ass! Nice glitch work too, fits perfectly in the flow of the track.

This is sick. Full, exciting arrangement, and really solid production. Fantastic work all around...

My Friends, the beats have been dropped.

This mix is definitely hits you hard right from the start with the synth and drums, and it only gets better and more aggressive from there-on.