And we're back! I'm now officially hitched - thanks to all for the congrats & best wishes! Anna & I tied the knot this past weekend and our wedding was a diverse cultural amalgam of Jewish, Russian, and American traditions rolled into a beautiful ceremony and a rockin' reception. It's a little ironic that the first mix I'm posting as a married man is titled "No Escape, No Hurry", but don't read too much into that - I'm thrilled & content & looking forward to our future together, especially our honeymoon, which is delayed until late August as she's studying for the Virginia bar.

There's a bit of a story behind this FFX mix from Rozo; I'll skip the details and point you to the request thread and this YouTube video. Short version is that someone on YT suggested a song was next to impossible to mix, and Larry jumped on the chance to have the OCR community prove him wrong :) It's a tricky source, no doubt, but it actually got picked up and turned into a mini-project. Rozovian writes:

"This started out as something more in line with the mood of the source, but since the project seemed to lean in that general direction I gave this a bit of swing and suddenly found myself in completely different mood, and quickly in a different time sig improvising stuff. The source in the intro and some of the drums are what's left of the first version.

Lotta Omnisphere here. And a barely filtered triangle wave. And a fake shaker. :D No key changes or pitch bends tho.

Willrock should get a mention for bringing this thing up in a chat and unintentionally (or so I assume) making me do this, Larry and Zeroboros for starting this whole thing, and The Author and Arcana for making it a project. This whole thing kind'a shows it matters who you are and what your request's story is when you post in Requests."

I'm actually still on a weird schedule from the wedding and running out of steam right now, or I'd say more, but I did want to get us back on track and posting more great music. In this instance, rather than talk about Rozo's mix - which blends his more traditional cool electronica with some jazzy/swing elements quite well - I'll just say how awesome it is that mixes like this can come out of a random comment on a YouTube video. Larry is the omnipresent social media eye-wreathed-in-flame of OCR, but his posting a mix request was just the beginning; that the community picked it up and ran with it is a testament to the talent & artistic cajones y'all possess. Rozo rose to the challenge and came up with something playful, cool, and crisp, and deserves some major kudos for doing so.

Rather pleasant for something titled 'hurry'.

It feels chill, not urgent.

Well, this is intriguing to say the least. Sounds electronic and tense at first and just opens up into a nice little jazzy number with more upbeat energy. The interest that comes out of this arrangement alone gets one thumb up from me automatically. You get the other thumb up because the ReMix itself is entertaining and very well done.

interesting blend of sounds here.. wasn't sure what to think at first (the intro didn't really gel for me, personally), but at :38 it clicks and all the elements come together quite cohesively. nice groove changes too. excellent work.

A bit of a (late) reminder, but the entire album, which features this track among others, has been released and you can download it!

Thanks to Rozovian and our other artists who contributed to the album and congrats again for making a pretty upbeat and jazzy remix. I thought that this was a very creative song, done in only a few days too

With the many listeners that go "wtf" when the track changes to triplets, we were bound to find someone who just has to be a contrarian. Did you just want to cement "Hey look at me, I'm reviewingz and finding big faults and problems with this mixz, postcount +1, reiviews +1 I'm awsome lol". I can take criticism just fine, I got no problem with opinion, personal taste and preference, but I don't have much patience for this kind of ridiculous conjecture about why I did what I did with it. Welcome to the superjoe30vig club of completely missing the point.

A proper response would be to redo this WITHOUT the triplets, without the quirk and all that - which was my original idea anyway. I'm not big on proper when I have a backlog of project mixes to do tho. This quick distraction from my other projects was fun, and if you can't handle that, that's your problem.

Also, Sorceror's comment is lol for a completely different reason.

Wasn't really feeling this track. The intro, which seems to get a lot of praise, is actually pretty off-putting for me. The disparaging elements of a chippey synth, the more orchestral strings, none of it really feels like it was meant to be part of the same arrangement. Instead, it feels like it was a bunch of different elements that all sounded good on their own, and were sort of put into a tumble dryer.

The changeup in styles and tempo is quite nice on its own. Great use of a genre change to prove the power of the ReMix. Still, it all sounds rather muddled and bland. Sort of like you were going for the smoke-filled jazz bar scene but instead of just a few guys in berets you had about 20. Could have really used some filling out as far as the soundscape goes.

And then you go back to your original tempo and style again. WTF? Why did we need that again, did you just want to cement "Hey look at me, this was a remix of 'Hurry' from FFX, don't you forget it! Remixer thumbsup!" It seems like a disservice to your movin' and groovin' section that we were enjoying that you bring us back to the less movin' and far less grovin' parts again. And not even that, but it feels a bit tacked on, there's not much in the way of transition there, so it is quite jarring.

I would have liked to have seen the central section extended out, get rid of the intro and outtro (or at least clean up the intro some) and then see what goes on from there. Because the central portion was quite good, I did enjoy it, but it only feels like a sidequest in the "prove the power of the ReMix by gather 10 spider silks" mission. Or something.

I was really taken with the beginning of this track but not so much the end.

First time I heard this one, I hadn't really read the ReMix details at all. Needless to say I wasn't expecting the shift in time signature in the middle. Surprisingly, my head kept bobbing to it the whole time nonetheless

As soon as this track started up, I could tell I was going to like at least some of it. If you think that's an odd remark, I should mention that I have a lot of experience with music that starts off sounding awesome before going off on a tangent that I don't like. Aaaanyway, I was therefore eager to see whether the rest of the track ... oooh! ... would deliver. It did. Nice one!

I daresy you're puzzled by the "oooh!" above. The reason for it is that it was as far as I'd typed this comment when media player hit the 2:13 mark XD This is the first OCRM for which I've been so impressed that I start commenting only about a minute into hearing it for the first time. Kudos!

The track starts out pretty basic, but the shift in style is well handled, and it's a pretty cool and groovy rendition of the theme. Nice feel to the epiano, and everything clicked pretty well for me.

I second all of the above. The latter part, where the speed picks up, is really nice and funky. If the e-piano around 3:00 doesn't make your feet move/your fingers dance, something's wrong with you.

Thanks ppl, glad you like it, especially crem if things suck for you and this track made things a little better. Somehow, BGC's specific mention of the snare also means a lot to me. Dunno why, probably that he found something specific he liked.

I have no idea how I found time and inspiration to do this, but it turned out all right. Gonna move my wips of this to my remixes dir so ppl can hear the progress and my initial, conservative concept/rip. It's in the "asap" dir. For those interested, I have a logic project file there too, for those of you who want to see how it looks like from the inside (and have logic

). It took me about six days from the first test render to the upload of the completed wav, apparently. Pretty good imo.

I'm really digging that bassline. All of the songs that came together really quickly for the Hurry! project are extremely impressive, not just the songs themselves, but the artists' ability to make them so quickly. I'm really enjoying Rozovian's take on the source, especially the funky, slightly more liberal bit as the tempo gets going. For a source with not too much to build upon, Rozo finds a way.

This mix is really funky, I'm actually a bit upset at the moment and I listened to this song and it had me dancing around in my chair a little. I'll definitely listen to it more often, I thoroughly enjoyed it.

Yeah, this one is good

Great overall sound to it. I'm hoping a couple more of the remixes flood onto here soon, too - there were a few really good ones there (this one included).

Wish I could submit mine on here, but... well, when people get the album they'll understand

i really enjoyed this tight stuff 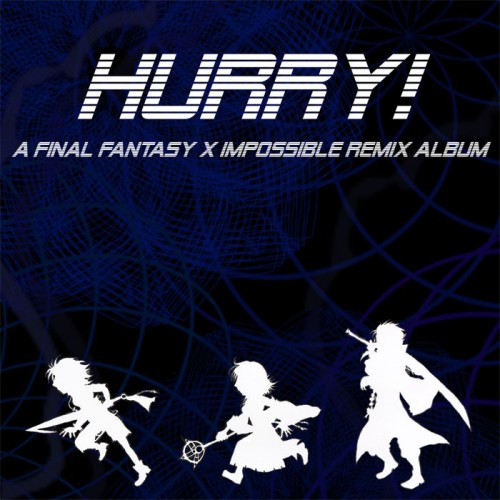