Big vocabulary words... for a big man!! Paying tribute to the various incarnations of Cid that have appeared over decades of Final Fantasy lore, Audio Engineering: A Tribute to Cid features thirteen arrangements of themes associated with him, from FF2 through FF12, PLUS Type-0 and Mystic Quest! Twelve artists contributed their unique visions to ensure that ENGINEERS EVERYWHERE will be done GREAT JUSTICE!! Never before has SO MUCH CID been concentrated into one musical explosion of AWESOME! Album director Taylor Brown (Mirby) writes:

"This album started in 2012 shortly after MAGFest ended, and was quite a simple idea. The first BadAss album had been recently released, and it made me realize that themed albums worked just as well as those based on whole game soundtracks. Much like BadAss was boss themes, Audio Engineering is Cid themes. More specifically, the themes of the many Cids of the Final Fantasy games. Of course, not all Cids have their own de facto themes, so I opened it up a bit more: themes that could be linked to that Cid, such as airship themes or area themes, were permissible. It worked quite well and, a little over two years later, the finished product stands before you.

Thirteen tracks by twelve talented artists showcasing all different Cids, in addition to a sampling of artwork by several different folks representing a small handful of those same Cids, are available for your listening, and viewing, pleasure."

That's a whole lotta CID!! While I keep wishing their had been a C64-themed mix that made the obvious SID/CID pun, I think you'll find the variety that Mirby was able to coordinate around this theme impressive, and the album very enjoyable! This is our FIRST album in the new "OCRI-XXXX" catalog series. The "I" is for "independent"; generally speaking, this album series will focus more on smaller albums, EPs, individual artist releases, and will also allow for re-releases of content already published elsewhere. This album, while on the smaller side of things, still packs a BIG punch; we start off a three-mix flood with this FF6 'Devil's Lab' sinister electronic/orchestral arrangement from DjjD:

"I'd always wanted to remix this tune, just never had the motivation to start. A while back, Mirby asked me if I wanted to be a part of this project and she gave me dibs on whatever choice I wanted. So it was relatively easy to pick out this tune. I took it without hesitation. However, remixing it was a different story. I must've gone through 4 attempts before this happened. I wanted something to really show you how evil Kefka really was, something diabolical. Thus, the song starts off with anvils, staccatos, and a "weasel-y" high pitched synth. All elements that give it a cartoony/villainous feel. Even at that, I was having trouble utilizing all of the source. But in the end, it turned out being another electro-orchestral blend of things, and I hope you guys enjoy! :)"

"Jake initially expressed doubts about remixing this song, but I reassured him he'd do great things with it. And he did, as evidenced by this song. Fantastic work that really shows his chops."

Obviously I'm pretty close to the source since I arranged it myself for Balance and Ruin, and I dig what Jake's done with it; very nice attention to modulation & filtering on the synth bass, which anchors the track, plenty of subtle production details, and a great blend of orchestral & electronic colours. I put the "u" in colors 'cause it looks more sophisticated-like and what not. This theme might be more associated with Kefka than Cid for some, but Cid Del Norte Marquez INVENTED Magitek, so it's all good, and there's plenty of machines and whirring and doo-hickeys in the lab, which evokes engineering. Great stuff from DjjD that kicks us off nicely and provides a deep & sinister version/vision of Cid; stay tuned for more mixes, grab the lossless FLAC+MP3 torrent or check out the site to download the MP3 zip, learn more, & help SPREAD THE NEWS!! Kiss an engineer, while you're at it!!

The bass sounds nice and has a great entrance. The quiet section, however, felt empty compared to the beat-focused ones. 2:36 has a nice experimental feel to it; it also relates to the title. I like the hit on 2 and 4. Decent mix.

If I was an engineer (or any kind of mechanical worker at all), I would certainly use this as my theme. Has the perfect kind of working factory or lab sound, and of course I did the thunder sound at the end. One of the best tracks on the album, good work DjjD!

With no offense to the others in this album...this one is the star of the whole album. Cannot stop listening to it...its going to be stuck in my head for a very long time.

Another awesome take on the source material.

And different than any I've heard before. I like the gentler, quiet parts. 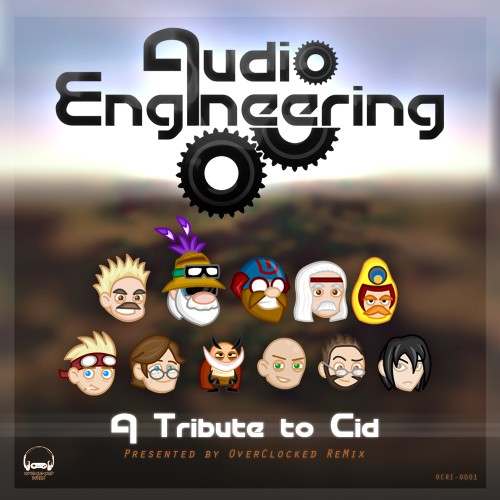