Uno, dos, tres... FOUR. Joe really left his mark on Balance and Ruin with a great selection of diverse & charismatic arrangements; this Latin flamenco arrangement of Mt. Kolz is vibrant, energetic, and chock full o' live performances. Led by acoustic guitar, there's also flute, trumpet, and even some singing. This is kinda the musical style that a fully-realized rendition of Claw's theme from Street Fighter II might have; very Spanish! Joe writes:

"I was looking through some of the gaps in the album set and I saw that nobody had done "Mt. Koltz." I admit, it's not my favorite track from the OST, but you can't just IGNORE a track and expect forgiveness. So, I started listening to it. That minor second chord shift that is prevalent throughout the entire track reminded me a lot of the way some traditional flamenco tunes sounded, so I thought I'd give it a try. My father-in-law, Ray Webb, happened to be in town while I was recording it, and I handed him my trumpet and backed away slowly, the result of which is that screaming trumpet lead you hear in the middle. The guitar and a lot of the nonsensical Spanish singing is live, as well as the flute. I'm still not any more Spanish now than when I started, but I do have some street cred, having slapped a bull calf at the Running of the Bulls in Pamplona back in 2011. And that, I think, counts for something

Many thanks to zircon for helping me mix/master this. Apparently, not knowing what compression is can hinder the quality of your final product. Who knew?"

I've heard that this "compression" stuff can be important, and also that "EQ" can help make your music more good, so I think he's on to something, there. This is the type of genre & arrangement that really lean on live instrumentation & very personalized performances to make things sing; the playful atmosphere and the constant fluctuations in tempo require that every major component ooze with character, and if there's one thing Joe knows a lot about, it's oozing. With character. Hmm, that came out all wrong. You get the gist, though - flamenco ain't somewhere you wanna go armed only with samples, generally speaking. The singing and background ambiance make me feel even more like I'm on Vega's stage and he's about to wall-jump me with that high-pitched "Yeaaaaaaaah!" sound that always came off just a little fruity, and not particularly intimidating. But I digress; acoustic guitar gets the lion's share of the action, but all accompanying components do their part in contributing to an overall jam that's transporting, traditional, fun, and (as per the norm for XPRTexpert) highly creative. Olé!!

The Uno Duos Trez Four gets me every time man 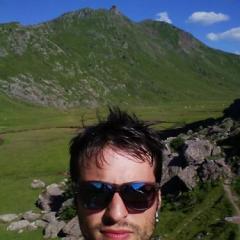 Man this is fucking awesome, im spanish and this is by far one of my favourite mix,

thank you for this work man.

On first listen, I could not stop shimmying. And for a fat bald white guy, that's saying something.

You need to do the chocobo song in this style!

Great job! This is really fun, and you should do something of this sort again.

What's another word for a young horse?

EDIT: Well, that's rather foolish of me. Got it.

I have to say that this is one of my favorite tracks on Balance and Ruin. This is surprising as I have a bit of a bias toward spanish/latin music. (In spanish radio stations, I think it's the same song playing over and over again. Then at some points J. Lo, Enrique Iglesias, Shakira, or Marc Anthony jumps in for two minutes then its back to whoever else was singing. I know, I'm bad.)

Anyway, I really enjoyed this song a lot. The guitar work is sublime and makes me want to dance. I'm a white guy, I don't dance.

Amazing work here. I will look forward to whatever you have cooked up in the future.

This is why I should have continued learning guitar. I'm now sad that I didn't because of this remix.

That title though, what is that, the mountain of youthful horses?

What's another word for a young horse?

Drop Mt. Koltz in the middle of Spain and it'd be perfect. The "Uno, Dos, Tres, Four!" thing is going to be a running gag around here, I can tell. Honestly, this has the perfect spanish flavor and sounds gorgeous. Flamenco at some of it's best, especially when the vocals popped in near the end and onwards past that. I'm really feeling this, especially the ending. So good.

A very, very nice take on the original. The entrance to the main meat at 1:07 or so makes the geese all bumpy. Pretty cool modal shifts (or whatever) towards the end at the quieter section before the final fast part. Love the tale about the trumpet part too!

Very nice work and the uno deuz trez, four cracked me up as well

This is why I should have continued learning guitar. I'm now sad that I didn't because of this remix.

That title though, what is that, the mountain of youthful horses?

This is my jam baby

I feel like I'm listening to the Flamenco dancer piece on River Dance. Awesome sauce! I'm a sucker for spanish guitar so I really enjoyed this. Hats off to Joe, he's a multi-versed machine man