I love the cello; it's one of my favorite instruments and has a resonance & soul to it that are to me unequaled. Sebastian has represented the cello amazingly on many of his ReMixes over the years, so when he told us he was working on a short album tribute to The 7th Saga that would be nothing BUT cello - specifically, three layered parts - I was psyched, to say the least. Over the last several months we've been working with him to make this release happen, and the day has finally come! Given the very specific concept of the album & purity of the arrangements, we wanted something that would really emphasize how the three parts come together. To that end, Sebastian recorded himself playing each part and provided us with videos, that José & I then worked on revising with some vignette and colorization effects and a scrolling score. The album is also being made available alongside full sheet music in PDF format. The end result is that you can see for yourself EXACTLY how these beautiful arrangements are put together and how the notes on paper corresponding with Sebastian's performance. It's a level of insight & detail that are logistically prohibitive for most types of albums, but which are not only possible but work amazingly well in this case. Sebastian writes:

"My goal with this project:

It's been a great journey to work on this project and I hope to do a similar project in the future!"

Mission accomplished, and then some; I really can't overstate how much I love this album... it's a great example of concept & execution coming together, it's something totally different from anything we've released, and it makes classical music and even the concept of arranging itself very accessible and transparent in a way that feels fresh to me. It will obviously have additional appeal to cellists, aspiring or otherwise, but anyone who just wants to get a better glimpse at part-writing and dynamics and ex

"Here I start off with parts 1 & 2 playing unison to really get some power in the melody. They're strong and clear until they eventually split up and the 2nd part becomes a countermelody. I'm very happy with the Town part and I think it gives a good example of what power three cellos are capable of."

I've looped this many times while finalizing the album website, and it's great focus/productivity music; stirring and emotive. You can easily SEE the unison playing in the score and through Seb's performance in the video, and hear the result - again, this type of transparency/visibility is something special. Larry agrees:

""Water" is nearly equally divided between the inn and town source tunes, excellently adapted for cello trio. The imagery I took away from it was someone pushing forward with a sense of quiet but steadfast determination. 1:16 changes from the inn to one of the town themes, and the track takes an almost romantic detour as the beat-keeping parts dropped out for brief periods. "Romantic" is probably the best word I can think of for the treatment of that theme, coincidentally enough a source that was first arranged for OCR by lovebirds Deia & OA. :-)"

The entire album is full of Seb's gorgeous cello work, so you need to pick up this 7th Saga suite whether you're familiar with the game or not. Props to bustatunez as well for the great mastering job on the album. Like Sebastian, I'm also wondering what Norihiko Yamanuki did musically after The 7th Saga, since he has no further game credits I'm aware of. That said, Seb's absolutely successful in making me want to further explore The 7th Saga's soundtrack!"

Seven arrangements, each for a trio... it's a twenty-one cello salute to a game soundtrack I now more fully appreciate. As a standalone mix, "Water" would still be fantastic in and of itself. Placed in the larger context of Seven Songs for Seventh Saga, it's perhaps the best example of everything that makes the overall album shine. Major props to Sebastian for a major contribution to VGM arranging, an album I'm very excited to be releasing on OCR that's completely different and yet completely in keeping with all of our goals and values, and which I know I'll be listening to for years to come. Grab Seven Songs now and help spread the word!

Of all of the albums I have discovered here on OCR, I come back to this one surprisingly frequently. Hell, I haven't even played the source games, but I just love how much energy you've put into your performance! When I listen to solo pieces (or in this case, "duet"), I find that piano is usually one of the only ones that can hold my attention, but for some odd reason this is an exception. If I played cello I would immediately want to follow suit, that's for sure! Keep on doing great stuff like this and I might pick it up

I listen to this album way too much. This particular song is actually my favorite out of the set. It starts off really strong with the cellos played in unison, the harmonies throughout are glorious, and the chord in the ending is unexpected, which doesn’t always work well but in this case is really cool. Actually, until I looked at the writeup on this mix, I wasn’t aware that it was two separate combined sources. Maybe I’m just oblivious, but I’d like to think it points to an excellent arrangement. Magnificent!

Beautiful arrangement. The Water theme is well represented here, with the different variations of notes. It has a very particular and quiet atmosphere, but yet it feels energic. It's quite incredible what you can do with only one instrument. I must confess I overlooked a little the album when it came out, but I'll definitively burn a few copies for my family this Christmas.

Oh god yes, Cello! Much like DJP, I absolute love the Cello and I think it's a gorgeous instrument capable of the most beautiful sounds. The video showing the music sheet going along with the playing is something I haven't seen before myself, so I truly enjoyed following along with that, even if I can't read music for anything. Kudos for that. As for the song, a trio of Cellos playing a good combined tune of the Inn and Town D's tune from Seventh Saga is a treat, and when it ended, I went into "Aww! More!" mode. It's not even a short ReMix, but it was so good that I could listen to it for hours, that's how much I love it. Congratulations on this album, AeroZ!

Nice drive in this one! I like the way the arrangement comes back to the main theme or "head" in the middle and in the end, giving the piece a good structure. The first two times the theme is played very affirmatively, the last time it's gentler.

Strong bass riff gives a good backbone for the two more melodic cellos to start dancing around each ofter after the main theme. After the second one, they're more together in playing a haunting melody. The last iteration of the main theme is more soft, before the ending, which is both strong and left hanging in the air.

I don't even know the source material, and now I'm so happy I checked this out. I love the feel and the mixing of the cellos - what a fantastic sound. I was fascinated by the video too - the mix of being able to watch the actual performances and source notes was astounding!!

I am checking out the rest of this album!!

I have been listening to this all day long. It's amazing. My definite new favorite. I crave more.

Holy shit. This is so beautiful. I can't stop listening to this album. 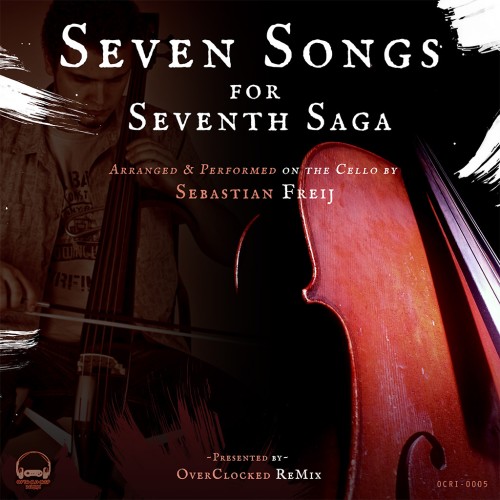