Our second cut from Chronology: A Jazz Tribute to Chrono Trigger takes on Magus himself; arranger and album director Wiesty (Dylan Wiest) writes:

"With this tune, I wanted to go for a very classic big band-style sound and I drew lots of inspiration from various charts that I had heard or played in the past. My favourite part about Magus's theme is how dark and driving it is while still being extremely melodic. I wanted to maintain this in my arrangement and I think that can be heard in the dynamic/rhythmic shifts that happen throughout. This track also features the only flute part on the album (if only for a brief moment), but it was a great opportunity to meet and work with Jorik. As with much of my arranging, I tend to arrange linearly; that is to say I'll start with an idea and evolve it as I go, sometimes without much of an idea where the song will go. This gave me a bit of a challenge for coming up with an ending for this tune as I had an idea of what I wanted, but no idea how it would sound once I got there. There were a couple of different endings that the musicians were kind enough to give me takes for, but in the end I was happy with what we chose."

Love that bass intro, with a nice chorus effect & some slides going on, before ride cymbals join & things go from there... the way this arrangement builds up momentum before the full pickup @ 1'24" is fantastic. In addition to some excellent guitar work, Jay's contributions to this album on bass really elevate almost every track; every musician plays a critical role, of course, but I guess I wasn't *expecting* to be as interested in what the bass was doing, and/or see it introducing an arrangement like this. Larry Oji writes:

"WOW, what a classy take on Magus. :-) Dylan's arrangement and percussion performance in particular added a great deal of movement to "Magus Confronted." Though its less bubbly than "Way Before the Day Before Yesterday" (due to the absense of DrumUltimA on vibraphone), that's to be expected when tackling a darker theme. Much like the previous mixpost, everything comes together wonderfully here, but Nostalvania's piano spotlight from 2:35-3:45 to pull back the energy level was my personal highlight, and you can't forget Anthony Lofton killing it with his own turn at soloing with the sax from 3:45-4:27. While I know we've had some good jazz arrangements of darker themes before, one may be hard pressed to find something villanous refashioned into this degree of smoothness, thanks to the precision of The OC Jazz Collective!"

It's certainly black tie stuff... you stay classy, Magus! That Dylan & co. were able to make this source sound so natural, like it was WRITTEN as a jazz piece originally, is a testament to smart, particular arranging & compelling, professional performances. Great, essentially stuff - check out chronology.ocremix.org for more!

I disagree, after listening to this, I think Magus' theme was almost made to be turned into this style. It works remarkably well. Well done to the artists, this is a great track.

There is no way you should be able to take a piece like this and make it sound this svelte. Gods, even the rocking parts at the end are smooth.

Definitely my favorite piece on the album. I could be biased because it's the only piece I actually played in, but the whole drive, climax working, soloing, chord syncopation and overall sound makes it just so darn satisfying to listen to. It was an honor to be able to participate in such a masterpiece. 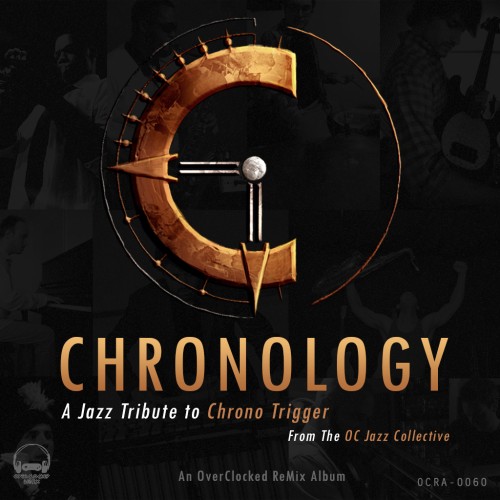