Sometimes you're cruising along and you need something with a good pulse & momentum, but sometimes you wanna stop in a parking lot next to a beautiful vista and watch the sun set between a couple of palm trees - as with driving, so it is with life. VROOM: Sega Racing has you covered either way, as Level 99 (Stevo Bortz) gives us a short-but-sweet ode to OutRun and several other Sega racing melodies with a smoov layered acoustic folk/ballad that comes with *built-in* ocean ambiance:

"I damn near broke my hands trying to learn how to play this. I'm also submitting this right now to prevent the title from becoming a self-fulfilling prophecy: I do not intend this to be my last song submitted.

I was one of the few people who enjoyed OutRun but was never particularly enamored by the music in it. Maybe my arcade growing up was just too loud with other machines, because basically all I could hear was the sound of the engines. Later on in life, when I was first discovering the wealth of well-programmed arcade VGM, I re-listened to OutRun and was dumbstruck by how beautiful "Last Wave" was. When Robbie and I first started discussing the VROOM project, I decided to take my acoustic and do what I normally do with it when I arrange video game music. It was intended to be the final track on a four-disc album, an ambitious goal which never came to fruition.

The main song is an acoustic rendition of "Last Wave" from OutRun (surprise, surprise, I break out the acoustic again). This song is quite a few years old now, but I think the quality still holds up. It's initially a note-for-note interpretation in my normal acoustic style, then, during the second run of the theme, I modify the lead to incorporate a few other Sega songs. I tried to spice it up with melodies from numerous other Sega racing franchises. It starts with Daytona USA's "Let's Go Away," then goes into OutRun's "Magical Sound Shower," followed by Sonic R's "Can You Feel the Sunshine?" The final notes of the song are the infamous "Game Over" from Sega Rally Championship. Source usage should be ridiculously high, somewhere in the 90% range.

The song speaks mostly for itself. I'm very pleased with the response. Grab a lounge on the beach as the sun sets, pour yourself a drink, and get taken away as the album cruises to a close. Game over, yeah."

As one of the original progenitors of VROOM, it's good to see Stevo's track out on the album, and it wraps things up on the perfect, mellow note. For all the themes he managed to cameo, and the relatively short duration, it comes off as a very natural, chill retrospective that's relaxed but very articulate & present; album director José the Bronx Rican writes:

"As with the obvious opening track, the obvious close goes to Stevo and his soothing moonlight swim of an acoustic guitar piece. There's plenty of evidence of that being the sort of thing he can pull off. I have clear memories of the unforgettable original sound wafting through downtown NYC arcades. The mood of that original piece is a natural for a guitar rendition in the same spirit, taking us all home."

As it's not one of OutRun's three historically selectable & oft-mixed gameplay tracks, it's nice to see "Last Wave" get some love - Larry was feeling the "soothing moonlight swim," too:

"Nice and chillax here, basically an enhancement of everything that makes the source tune great in the first place. The other Sega racing theme references were so smoothly integrated, nice work! :-)"

Classy, calm, & just the type of track for your post-race chill; kudos to Stevo for this mix and for some of the original push to get VROOM rolling... crossing the finish line has been a long & winding road, but now we can all idle for a bit, and this is the perfect mix for it!

I'm playing a lot of 3D Out Run lately, and hearing this brought a smile of recognition on my face. It's usually annoying to hear the high-score track for me, I've beaten the game only twice so far, so most of the time the track means defeat to me.

This arrangement has an interesting feel to it.. in a way, this would fit really well in a modern re-vision of the game, but in another, the arrangement has a slight tint of melancholy that feels slightly too serious for Out Run. But it's really good for an arrangement of Out Run music, don't get me wrong.

1:44 has some clashing harmonies. That's about all the criticism I have for the piece. The playing is good, the incorporation of other material is seamless. Pretty good work!

Very mellow and the songs all fit together well. I dig it 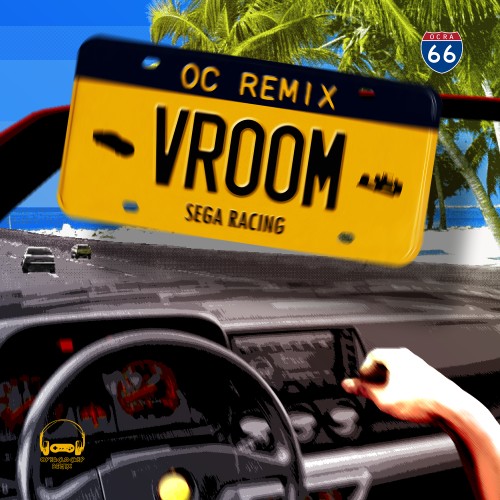