Home About Difference between revisions of "Apex 2013: Straight to the Top"

Wiki: Difference between revisions of "Apex 2013: Straight to the Top" 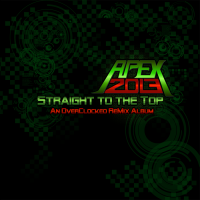