Home About Difference between revisions of "Apex 2015: This Is the Moment"

Wiki: Difference between revisions of "Apex 2015: This Is the Moment" 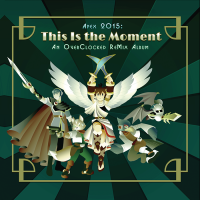 We always have such a great time heading out to Apex and watching all the players absolutely destroy at Smash and all the other games out there, and every year the event only gets bigger and better. We're looking forward to doing more albums in the future, but for now, enjoy "This Is the Moment," and GET HYPE!!"
– Shariq Ansari, Director


Apex 2015: This Is the Moment features ten tracks from ten artists, arranging themes from eight different fighting games that comprise the Apex 2015 tournaments. It was made by fans, for fans, and is not affiliated with or endorsed by any game publisher or developer; all original compositions and characters are copyright their respective owners.

3. DarkeSword - "Got My Mind on My Money Match"

9. Neblix - "Girl from Another World"

Browse and download more than 2,900 free ReMixes honoring more than 800 games. Or download any of our free albums featuring more exclusive mixes.