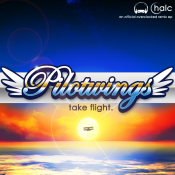 "Hey, I made this. Enjoy it!" – Drew Wheeler, Creator & Producer