When you need creepy music, HoboKa (Alex Shtokalko) has got it for you in spades. He's been busy recently, with a new two-volume original album out -- Grim​-​Dark Works of Doominess -- ESPECIALLY worth your listen during the grim-dark season of doom that is Halloween. And SPEAKING of the Halloween director John Carpenter (segue!), on the ReMix side, we're happy (or scared, frankly) to offer HoboKa's remastered vision of the worrisome city of Louran, originally from our Paths Less Travelled: Terranigma album! Alex explained how Usa's involvement provided the finishing touches to help the atmosphere sound its best by being its worst:

"Went for a storm-ish drum, campy 80's horror vibe. I think it paid off well. To top it off, I've summoned Usa (Daniel Lippert) from the bowels of HELL (o.~) to add some much-needed EPIC-ness and to touch up a few samples (I think I wound up swapping the re-touch-ups with samples I found from Spectrasonics' Omnisphere -- sorry, Daniel!). Nevertheless, his awesome female vocalist sample at the 1:53 area... not sure what style or culture it came from (Tibetan?) is perhaps one of the BEST vocalist samples I have ever come across and it has so many unique articulations too. Usa is a KING when it comes to production and style. Enjoy!!"

Album director co-director Jorito was all over this piece's sound choices:

""Wandering Spirits" is the track that plays in the mirage city of Louran and it has this creepy, ghostly, deserted, and haunted feel to it. HoboKa managed to retain that feel and amp it up to 11 with his take on it. The atmospheric sound effects, monster grunts, eerie chanting, and big drums do a great job at creating this horror vibe. Campy and perhaps a bit cliche? Maybe. John Carpenter-esque? For sure. Comfortable and enjoyable? Well, maybe not that, but definitely worth a listen if you played the game, because it immediately takes you back to Louran and its nastiness."

Album director co-director Troyificus hearkened back to another John Carpenter film score, while praising a well-executed premise that sets a dreary mood, and might even prime you for a jump scare:

"Hobo was going for creepy, and creepy was got! He namechecks John Carpenter in the title for good reason; this sounds like something that would have been right at home on the In the Mouth of Madness OST. Eerie, slightly off-kilter leads give way to wailing spirits in two and a half minutes of pure dread and menace. I wouldn't recommend listening to this while walking through the woods at night (I speak from experience!)."

As recognized by all of us on the judges panel, HoboKa's melodically conservative approach here makes the most out of deepening the textures, eschewing some of the source's cartoonish-sound instrumentation with a much more fearful, foreboding feel. Sound design is a skill and an art form that HoboKa's diligently grown in. You'll hear that in a big way in his pair of Grim​-​Dark Works of Doominess albums, and it's been awesome also hearing it pay off with mixpost after mixpost! Now, the premise behind this one might be misguided, because I'm pretty sure John Carpenter wouldn't get eaten by zombies, he'd flip 'em off and yell "Fuck you!" Nevertheless, this one's a nice choice for any haunted house! ;-D

NVM post that was here. Carry on folks. Also, thanks for posting this collab-mix OCR!! ? 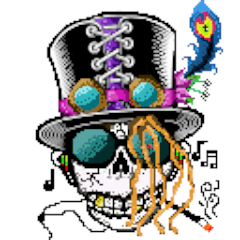 Just had a listen, and from hearing some of HoBo's other works, this is certainly right up his alley.

Got much better at building atmosphere, and it's just hitting all the right points of intrigue, peril and fear within the composition. It went from sounding like something from its source, to something from Zombies Ate My Neighbors (which I am guessing is the inspiration, judging by the title name.) Especially with the vocals towards the end. ♡

Love it. A worthy listen and just in time for Halloween too, so yeah. Congrats on getting (another?) breakthrough song, HoBoKa, and here's to more in your future. ?

i think this is my fav tune from terranigma. that's probably why i think this doesn't fully do it justice. i tried to remix it once and failed.

it has this kind of melody that i've never heard elsewhere, and that really grew on me after prolonged play.

it could make for a really legendary remix in my mind, one that would be near impossible to pull off. you'd have to get super lucky or/and be extremely skilled. that's my opinion.

so, good tune choice anyway, hoboka! sorry, but my expectations for this particular tune are sky high.

Oh, man, this song gave me chills when I first got to that point in the game. And that was in my adult life. Really nice job here on creating unease in an elegant way. Delicate elements dancing around the deep and dissonant, this thing doesn't let you lower your guard. Great work, HoboKa.